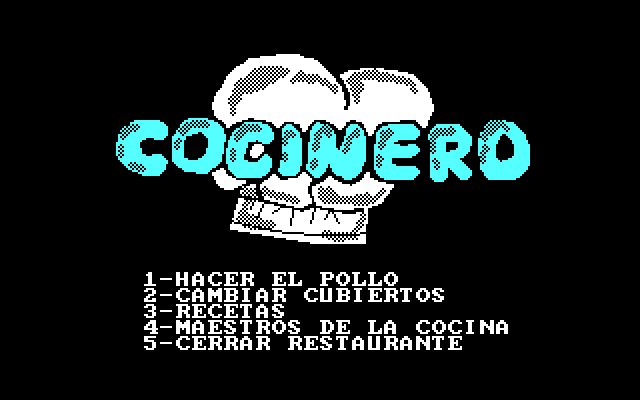 With many different features and various levels, Cocinero released in 1990 hit the right chords right from the beginning. Play this excellent Arcade game and online now.

In it you play as a chef whose task if to be expressed figuratively, is first cooking and then protect your culinary masterpiece. The chef presents a funny goggle-eyed figure in hat. For four levels, (which is on all four levels) he is given fifteen lives, they must literally push the Cup located at the bottom of the screen, various types of fruit (in each representative which have eyes, and who actively resist the process, although direct harm to the chef cause I can't), while trying to avoid animated (apparently) kitchen utensils, hunting already for a chef.

At each level there is one and the same time limit of two minutes for which to do our business - and a fixed quantity of fruit. But if the first danger is only a butcher's hatchets and shoving will only with tomatoes, but already at the second level to the tomatoes added the cabbage, the third - raspberries, the fourth carrot. In addition, the third and fourth levels in addition to hatchets against you, there are strange objects like blades. Any contact with a hostile subject takes cook one "life".

Present in the game and the fifth level is radically different from the previous ones in appearance and even sub-genre: arcade side-view is replaced by a virtual shooting gallery in the first person. On the screen before us - juicy fried chicken, which attack the various representatives of the phylum Arthropoda: down on the web spiders, flying in from the top of the screen giant wasps and flies... These things encroached on the sacred - they want to eat chicken! When you touch to the dish troglodytes disappear, but with them, with chicken bones gradually peel off and the meat; our task is over two minutes to shoot gluttons and try to the expiry of this period to keep the chicken at least a modicum of what you can eat - then the victory will be counted.

Graphics, like most games from Ediciones Manali, - CGA, as such, no backgrounds, the quality of the drawing (not counting the fifth level), frankly, are unimportant, but playing all of the above does not prevent - on the contrary, immersion in a surprising and somewhat humorous atmosphere of the game complete. Highly recommended to both lovers of interesting arcades and collectors of rarities; just remember that the management of the game is "Spanish", which differs from the usual.

Do you want to relive your memories and play Cocinero online in your browser? Play it now for free.