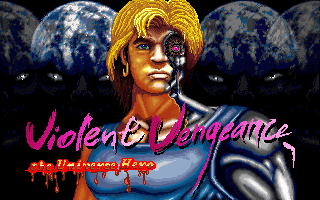 The Universe Hero was launched by SKC Soft Land in the year 1995 which was loved by all old and young. It’s an interesting DOS game and can be played online by clicking here.

A little-known company Accend against other Taiwanese developers looks in some ways even revolutionary. They are the first to use the engine Build to Build the "shooter" first-person, and even in the entourage of the ancient Chinese martial arts. Was the name of that game is The Legend of the Seven Paladines (1994). In the same 1994, the company has developed a good fighting game called The Universe Hero - it will be discussed in this description.

The end of the XXI century, the milky way... In the last century, the Galaxy swept a large number of murderous wars. But now for the sake of peace and stability - all the warring parties have decided to conclude an agreement on conducting the so-called "sports wars", which became a replacement for conventional battles in the canonical sense: with combat lasers and space cruisers. Now based on this Memorandum are the best fighters once a year come together in an uncompromising battle for the right to possession of title – 宇宙英雄, "Hero of the Universe." Yes... such incredible heights of greatness of spirit seems not to have reached even in the fighting games: it sounds pretentious than even "the Lord of the Galaxy." But that's not all. The winner of the tournament automatically receives a post of the President of the Space Federation (宇宙盟主). And now, to fight for this honorary chair for the tournament once again brought together hundreds of the best fighters from different star systems.

Well, it's a massive plot complication. But expect a fun alien zoo, as it was in the game Xenophage, from this creation, unfortunately, is not necessary. A total of 10 fighters of different origin. Mostly it's the people-the anthropoids, there are even three women. Exotic participants of the tournament are man-lion (南姆西), vampire demonton (藍西洛) and green from alien worlds (巴斯德), leading, apparently, to an aquatic way of life. All the men are good, each have their own distinctly noticeable strengths and weaknesses. Many people use bundles of energy as superataka and some edged weapons. Green alien generally can instantly turn into a dangerous multi-colored bubbles. The management here is extremely simple. A, D, X, W – move, attack – Tab, protection – backward movement (this configuration is the keyboard comfortable for the player to the left). Superataka is activated by the combination: forward + backward + kick (D + A + Tab). If suddenly a player hitting under the pernicious influence of the ideas of "non-resistance to evil by violence", will start the fight with his hands down, such a pacifist after about 10 seconds it really is already on the floor in the full "out". Yes, there are quite a rigid and dynamic model of damage, so that fans of the genre will be very interesting. Character for tournament, you can choose any. The impression that the computer opponent chooses not randomly, but according to strictly specified algorithm (script). To start the tournament – menu (開始游戲). By the way, the interface is very "bright" and comfortable, then I felt the familiar "shuterny" style developers.Signs of realization of the games, the menu was not seen. Rules – classic: three rounds for 100 seconds, to win you need to make two knockout of the opponent.

The graphics are bright, and judging by the quality of the drawing, it is suspected that this part has applied his talent of Korean artists – all too beautiful. The movements of the characters a bit ragged, lacking the detail of the animation. Backgrounds background done almost "live", and each character in his home game they are unique, with the national colors, so to speak. The background music is pretty typical for this genre, there are no features cheerful melody with a heroic twist.

This fighting game, of course, extremely simple, but at the same time provides the user with addictive gameplay. The game is made in traditional Chinese, but the characters here will be only in the menu and in the text of narrative history, with just no one there. Unfortunately, the game was very obscure, even on the so titled publisher like Soft-World. The reason for this is not exactly a language, but something else; probably among the greatest fighting games of those years, no wonder was just lost. However, our website gives a second chance to all such forgotten games.

Play your favorite childhood game The Universe Hero online in your browser for free here.