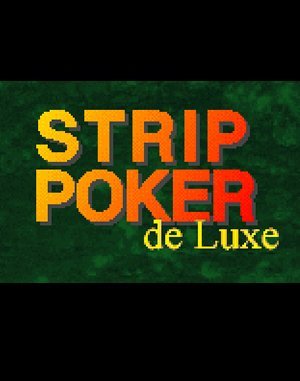 You know the drill, pick the girl you want to play against, give the game enough time and see her getting progressively nude! Simple, titillating and relaxing enough to be worth a go. Within the early 90s lineup of strip poker games, Strip Poker Deluxe is one of the better games, on one hand because of its marginally better graphics, on the other because of its simulation. The game itself plays better than most other games in the series because of the simpler controls, a good setup of sounds that accompany the game, which creates a nice dynamic and also because the digital photos of the girls are rather good. At a first glance I almost thought that the models were known porn stars from the 90s, but no, they are just great looking models! So, if you like to return to poker games from the 90s, know that Strip Poker Deluxe is indeed worth a visit. It is easy to control, sports enough variety in terms of its girls and is a carefully designed overall game, wrapping and content as well. Definitely worth a go.
Edeph

Poker has to be one of the most famous card games in the world. Now combine that with playing with a nice looking woman and stakes are not the money, but the clothes, than you have a match made in heaven. Now, Strip Poker games are good if they’re well made. Indeed, there are some strip poker games that are quite bad. Strip Poker Deluxe is another story. Part of the Strip Poker game series, this game has taken the very first game and basically fixed the graphical flaws it had. I had a bit of a problem playing this game because it was in Spannish or Italian, I quite can’t really tell, but was able to play after a minute or two. While the graphics have been vastly improved, the gameplay is improved just a bit, meaning that you no longer have to use the keyboard. The rules are simple and I don’t think that I need to explain. There’s one complaint that I have with this game. The sound is quite messed up, meaning that everytime you go to a new screen, the music just stutters for a few seconds, which is incredibly annoying. I had to turn off my speakers because of this flaw. Other than that, the game is decent. So overall, if you wish to play a different game of poker then Strip Poker Deluxe is for you.
Click here to play Strip Poker Deluxe online
Rating breakdown
Game Developer
Digital Dreams Multimedia
Game Genre
Strategy/Tactics
Game Release date
1994
Game Theme
Adult, Cards