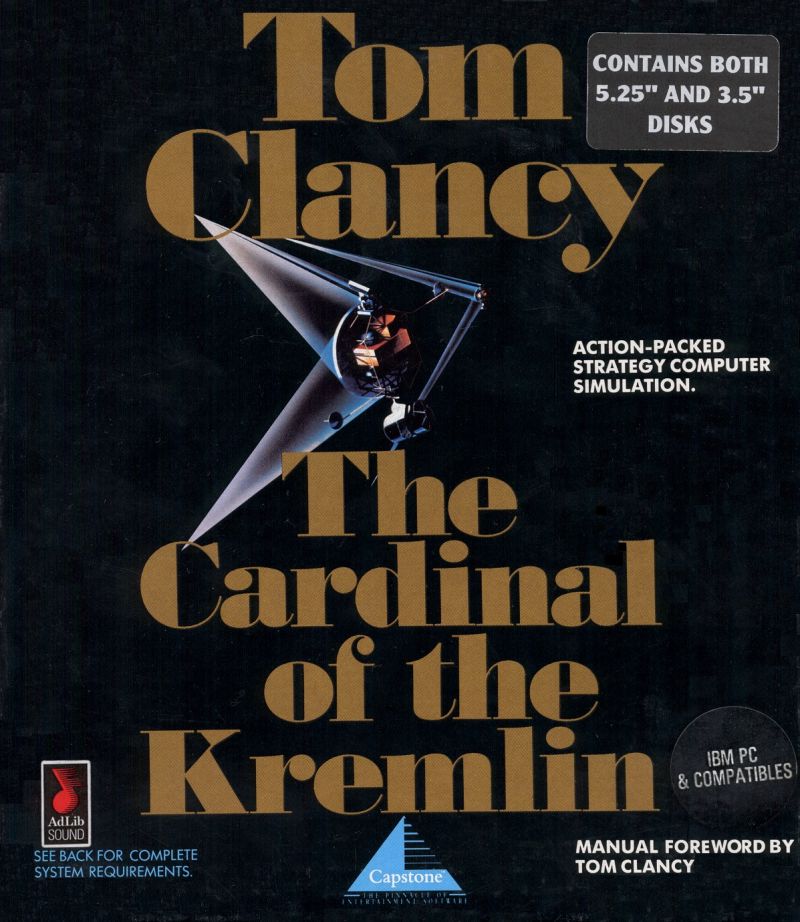 The Cardinal of the Kremlin

Click here to play The Cardinal of the Kremlin online
3.5 /5

The Cardinal of the Kremlin, a DOS game was released by the very talented group Capstone Software in 1990. Little did they know that they will end up making history. Play this game again here.

The Cardinal of the Kremlin description

Interesting turn-based strategy (and at the same time – a kind of simulator of a spy), based on the novel of the same name by Tom Clancy.

The mention of the name that is known for its delicate "love" to our country, the writer has to tell us about what will be discussed here. That's right – the Russians invented another terrible weapon of choice for mass destruction of mankind 5/6 pieces of land, and in any role they need at all costs to prevent. And here it is only a "wrapper" is somewhat unusual.

So, the mid 80-ies, the ongoing (just who, perhaps not so "exotic") spy hysteria and... the war in Afghanistan. And there, on the border of Afghanistan and the Soviet Union, a us satellite one notices something very very strange. It soon becomes clear that this "something" - Soviet military top secret super project under the code name "Bright Star", the newest system of laser guidance which already allows you to shoot down satellites in space, and if the Russians manage to finish the work... immediately starts the deployment of "their answer" - a military top-secret U.S. super group "Tea Clipper". Naturally, the KGB agents and the CIA are not asleep. In both the "cradles" of projects they already have, and there are also the Kremlin and the White House, but also in the KGB and the CIA, and there are those who are looking for themselves. I think you are one of them? Not at all!

In this game you play a completely different role (in fact, just this circumstance allows to rate the game so highly as she valued) – project Manager of "Tea Clipper" (it's Tom Clancy, so that the user "Asterisk" wouldn't dream of it [but as we would like!!!]). Your task – at any price to complete a project of its own laser targeting system and protection, not just to finish and to do better than the Russian, and even before they finish their... And it is Oh so easy. Moreover, the most important element here is not the question of where to take the money (they will, most importantly – do not give intermediate results), and how to protect information...

Spy – the linchpin of the story and even gameplay. The notorious "they" could be everywhere (and, in General, it is even true). For example, we want to take on the work of renowned and respected physicist – his knowledge of us would be very useful. How do we know that he is not a Soviet spy? We want to do some test on the earth's surface – how do we know that there's no Russian (which we do not see, but who is) to record, to film, to photograph all this? Finally, how can we be sure that those people that we already work with, are not Soviet spies? In this game you can't trust ANYONE.

Of course, the secrecy level can be reduced to an absurdity. Tests are carried out only under the ground, any new job do not take it, for the slightest suspicion to fire people, even to lock themselves in a bunker, surrounded by a pair of dedicated people - please. But such a path inevitably leads to failure of your tasks (and even those "couple of people" can bring). Will have to take risks. The risk in this game is our constant companion. Perhaps there is no such risk at all more in any game.

However, our situation was not entirely hopeless. Spies is not only Russian, but also "us". And not just "on the spot" (i.e. a kind of "contusion" in our research center), and "there". And by "there" is understood as the Kremlin and Soviet scientific base near the Afghan border. And they constantly provide us with information about what is happening in the Soviet objects, and that is "at", and help about, for example, a situation "we" can come from an ocean – suddenly "our" people "out there" they know anything about operations of the KGB "here". BUT even this – the double-edged sword: though less likely, but any of "our" spies quite a too can be traitors... Fun, do not say anything.

What can you say about the graphics of this game? Perhaps, she's wonderful. Is that only in the arcade mode mentioned is too simple (too much, alas), but this regime – not something that is not main, and all "optional". As for the rest – we have some very beautiful and varied screens, which will be (it can be happy) is not so much the lyrics (although it will, of course), but beautiful images from test your inventions before a personal meeting with the President. And even the statistics screens (so far without them) doesn't look that boring. Play objectively nice.

The highest score the game allows you to not only put its plot and lack of choice in the beginning – go through the same thing, but really "for us". If the opportunity was given – it would be truly brilliant game. And so – only nine. But still: if you like a good and smart strategy, and/or spy thrillers (because moral situation then pull on a real Thriller), then pass by this masterpiece strongly suggest.

Do you want to relive your memories and play The Cardinal of the Kremlin online in your browser? Play it now for free.