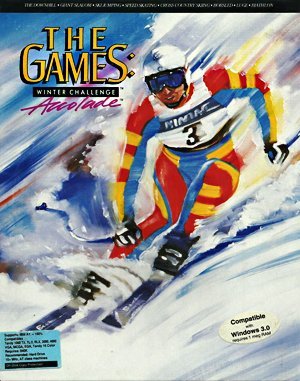 The Games: Winter Challenge is a sport video game that portrays seven winter sports that are competed in during the Winter Olympics. This game however was not endorsed by the International Olympic Committee, the United States Olympic Committee, or any similar organization for any other country. It was released for the Mega Drive/Genesis and DOS. Play The Games: Winter Challenge online!

The game features a basic 3D engine which allows to simulate slopes with ease, which enhances the gameplay of some events such as the Downhill. Gameplay, as expected from a Winter sports game, relies on finding the faster trajectories in most events (Downhill, Giant Slalom, Luge and Bobsled), pacing the run correctly (Cross Country and Biathlon), skill and timing (Ski Jump), with button mashing reserved for just one (speed skating). The player (up to ten) can select his (or her) competitor face and nationality from one of 16 possible choices, and by selecting different difficulty settings, different computer controlled athletes take part in the competition along the player.

The game offers a Training mode where the player can participate in a single event as one player. Once completed, the player can go again, return to the main menu, or watch an instant replay of their performance.

The other mode is Tournament mode where the player can create and participate with up to ten players. If less than ten players are created, the computer provides the rest. Once the players are selected, the game shows an Opening Ceremonies clip and then takes the player to a tournament screen where they can see their icons for the seven events, as well as four buttons that shows their current standings, starts a new tournament, allows the entering of a password to return to an existing tournament, or return to the main menu.

You can play The Games: Winter Challenge online here, in web browser for free!