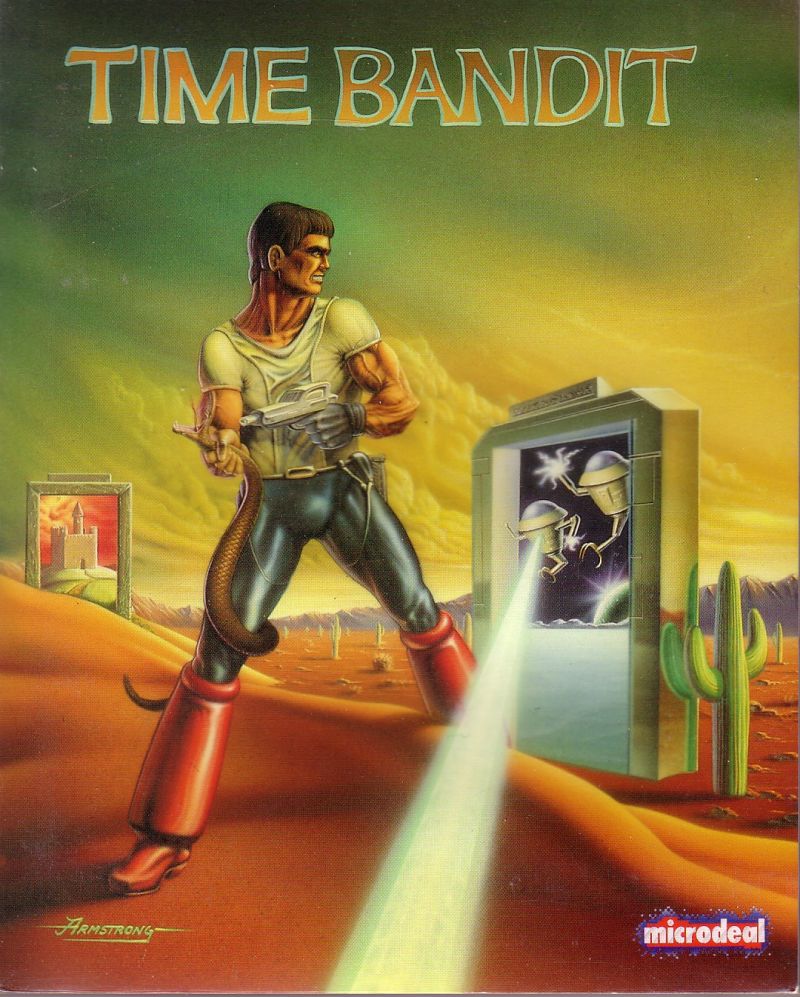 A very interesting DOS game was released by MichTron Corp. in the year 1988. The game was called Time Bandit. You can now play it online.

One of a kind mix of genres: arcade top-down and a text adventure (!) in one bottle.

You play very bad man – a thief from the far future who is using time machine, moving through different historical epochs (once in the distant past, and in the very distant future, even for him) with a single purpose – to steal something. However, it turns out, our hero is still a noble (more on that below).

The game has only sixteen levels, you can start with any. Each corresponds to some epoch and is there a particular place: for example, it can be a medieval battle arena, wandering in the space ship, Ghost town of a strange era, strange factory of the XIX century, the hotel California of the century XX and so on. And in each place there as all sorts of bonuses and various enemies.

Most of the gameplay is dashing races with the top view in the style of Gauntlet and the Immortals (on which the game is very similar) on a simple maze with the destruction of the various villains and the search for power-UPS and keys to locked doors. After passing a level, we turn to the "General map", where you can choose your next destination and that is very good to save the game.

But each location is still sometimes possible to find a kind of "terminal" (or similar), clicking on which the game switches to a fully text of the quest: you will talk and will give some very noble quest (according to the times in which you will get) – of course, not for free. Most interesting is that almost no hints about ways to run there, so I think there also have pretty. And yet there is a mini-game, but they we not speak in detail will be: I note only that they are made all in the style of arcade hits of the 80s and surely will delight all nostalgic.

How will surely appreciate the game itself – a true classic of the genre and an example of the extraordinary courage of the experiment on the compound that until recently seemed unconnected, and experiment is more than successful. Yeah, somebody might scare away the graphics, which is very similar to Gauntlet (and even worse), but such a wonderful game, a beautiful picture and its charm quite different, that you can only feel, not describe. A strict recommendation to all oldhamers.