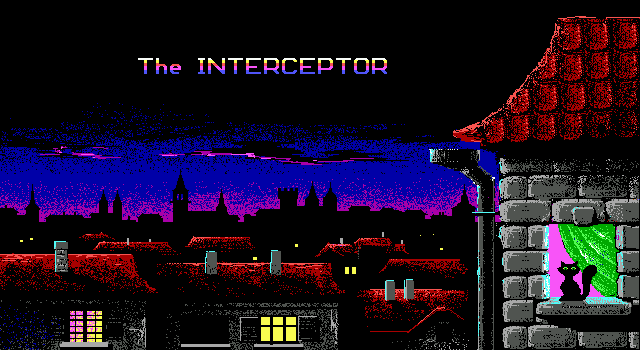 In the year 1993, The Interceptor was launched by Doka Studios, a top-notch Action game with an amazing and engaging Arcade gameplay. Click here to play it online.

Introducing one of the rare games from the popular in 1990-e years the Russian developer Doka Studios. The Interceptor was created in 1993 to the exit of the known strategies and quests of the company.

The Interceptor is a simple arcade shooter - meets us the Intro, where over the city's roofs flying our ship-the interceptor. What is the gameplay of the arcade with such a telling name? Each level is a static screen, where on earth there are objects (trees, houses), our ship must defend from alien invaders, flying saucers. Enemy ships fly from the top of the screen in different directions, horizontally and drop bombs on the city. In contrast, our interceptor can move in all directions, however, to the trajectory of the enemies he could not reach. The bombs are dropped by enemies, come in two types: conventional (gray) and hydrogen (blue and red). Every conventional bomb destroys one object on earth: the red razing to the ground the whole city, and the blue at once destroys our ship. However for that to happen, the bomb to reach earth, and this we must prevent. Our ship can shoot missiles, podbivki ships and bomb the invaders. We also have on-Board guns, shooting left and right at the same time and podlivaya only bombs. The interceptor can take a few hits of bombs of all types, and sometimes it's better to take the hit blue or red bombs than to allow them to reach the ground. Missiles and bullets eventually end, but enough to fly to our starting point at the left corner of the screen, and we rearm and restore the armor of the ship. The number of emergency landings is not limited. At the bottom of the screen are four scales - our armor, ammo (missiles and bullets) and the number of opponents.

The graphics in the game are pretty good - the model is carefully drawn. On our ship you can see even the side lights and fire nozzles. Music only plays in the Intro. The game is pretty comfortable, as the game is friends with a mouse, and the left and right buttons we shoot from the rocket launcher and from on-Board instruments, respectively. After each level or when you lose, you receive a statistics screen showing the number of downed ships, spent rockets and destroyed the enemy objects. At the end of the level is given and the final result is the total score of the game, and the levels can be played and with negative result.

Overall, The Interceptor is a rather complex game where from level to level, the number of blue and red bombs increases, and if the destruction of all terrestrial objects, the game continues, the fatal damage of the interceptor game over.

Unfortunately, not numbers levels and it is difficult to say how many of them in the game and is there any end, as far is quite problematic. Maybe someone wants to find out - go for it!

Play your all-time favorite The Interceptor free on your browser here.