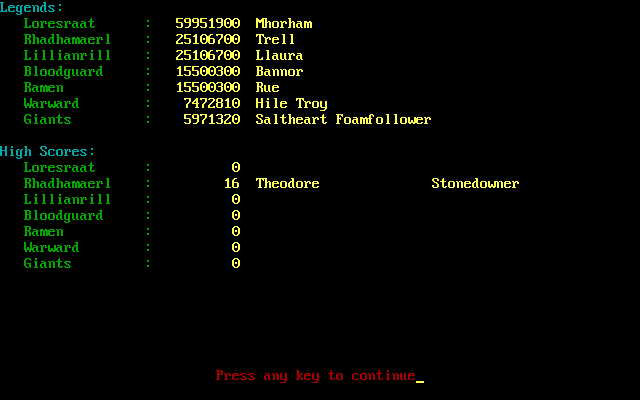 Do you want to relive your good old memories? Play The Land again, it’s a perfect DOS game launched in 1989 and a must-play for all video game lovers.

The forgotten rogue-like based on a fantasy trilogy Stephen Donaldson "Chronicles of Thomas Kovenant". And, apparently, for the present excitement to read the literary source is necessary, because without it, the plot is not much clear, except that the action takes place in a fantasy world and have to fight another evil.

General principles the gameplay is identical to other similar games: before game start it is necessary to create a character, choose a class, distribute properties and then go to the dungeons, where you have to fight monsters and collect various treasures, improving with this their own characteristics, weapons and experience.

However, despite the apparent similarities with other rogue-like, The Land in fact very unusual. And it's not even that there are unique classes (such as Bloodguard), and the types of monsters are taken directly from the original and also unique. The fact that every hero there is a main "quest" (or "path"), which opens as you progress through the game and who basically should be followed, and – a certain number of game months of the year. When you start the game you year have to spend on your "path" to six months, and after every five levels to this number will be added for another month. If the "way" to follow – all abilities of the hero for a long time very much reduced. So the game is not only challenging in itself, but also in terms of understanding her world.

Graphically the year when The Land looks, of course, "not": graphs (CGA) is the-minimum. But we can only once again repeat that "bagel", and even such unusual graphics are simply not needed. Much worse is that the game due to its complexity would not prevent a detailed user manual, which, alas, no. But despite this, the rarity certainly can deliver a lot of pleasure to all lovers of old games with a similar focus.

Have you ever wondered what kind of video games were played in the good old days? Try playing The Land online now and we are sure you will not stop playing again.