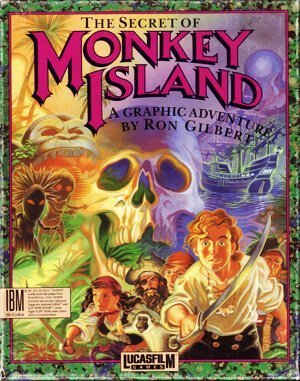 The Secret of Monkey Island

The Secret of Monkey Island is a 1990 point-and-click graphic adventure game developed and published by Lucasfilm Games. It takes place in a fantastic version of the Caribbean during the age of piracy. The player assumes the role of Guybrush Threepwood, a young man who dreams of becoming a pirate and explores fictional islands while solving puzzles. Play The Secret of Monkey Island online!

Deep in the Caribbean lies Melee Island, ruled by the governor Elaine Marley. The cruel pirate LeChuck is deeply in love with her – so deeply that he refuses to accept his own death. As a ghost, he dwells with his undead crew somewhere near the mysterious Monkey Island. Meanwhile, a young fellow named Guybrush Threepwood is determined to become a real pirate. At the Scumm Bar he meets three pirates who tell him he has to complete three difficult tasks in order to be worthy of this title. But as Guybrush is trying to complete these tasks, he encounters the lovely governor, and this meeting changes his life forever. Risking to incur the wrath of LeChuck, Guybrush has to prove his wit is as sharp as his sword, and figure out a way to foil the ghost pirate’s plans.

The Secret of Monkey Island is an adventure game that utilizes the command verb-based SCUMM interface first introduced in Maniac Mansion: the player constructs commands for Guybrush by selecting an appropriate verb and then combining it with an object or an inventory item. Objects that can be interacted with are highlighted when the player places a cursor over them. The game is the first LucasArts adventure in which it is impossible to get irrevocably stuck; like in Loom, the player character also cannot die. The branching dialogue system, where the player chooses between several available responses during conversations, allows the player to talk to characters in different ways without fearing a wrong choice, and is often used as a humorous device.

The puzzles are predominantly inventory-based; most of the problems in the game are solved by picking up items and combining them with each other or with objects (or people) in the game world. Several tasks are dialogue-based; among those is the humorous “insult swordfighting”, which involves Guybrush learning and choosing witty insults while dueling pirates.

The CD DOS and FM Towns versions of the game have slightly updated interface (with graphically represented inventory items instead of the text-only labels in the original version), as well as CD audio music tracks.

You can play The Secret of Monkey Island online here, in web browser for free!

An American Tail: The Computer Adventures of Fievel and His Friends

Sam and Max Hit the Road

The Lost Files of Sherlock Holmes