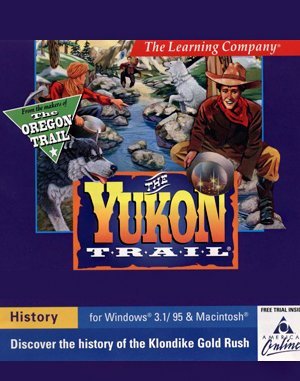 The Yukon Trail is a 1994 computer game from MECC, the creators of The Oregon Trail. The game is based on the Klondike Gold Rush of the late 19th century. Players start out in Seattle and must make decisions concerning supplies, a partner, and travel plans as they head to Alaska before boating down a river to Dawson City and staking a claim. Play The Yukon Trail online!

Klondike Gold Rush of 1897. After arriving in Dawson City you have to pick up a partner, buy equipment and build a boat to overpass the mountain river. During your search you’ll meet various famous figures like Jack London, learn about Alaska and Canada. Also you can play cards, bet on races and pan the gold. All your experience will be written to journal.

The game starts in Seattle in August 1897 (right before the actual Gold Rush). The player must first choose one out of four partners. Each partner has unique advantages over the others: the miner collects gold more effectively, the native can carry more weight, the carpenter can build and repair more effectively, and the businessman has more money. Next the player purchases two tickets for one of three ships to Skagway or one of three ships to Dyea. Tickets are more expensive for ships that depart immediately, and less expensive for those departing later. The player can buy equipment and food for the journey at Pioneer Outfitters, or they can wait until they get to Alaska. There is also a peddler at the wharf who will sell two useful (or sometimes useless) items. The player’s partner can offer their advice on making purchases, but their advice is sometimes unwise.

Upon reaching Skagway or Dyea, the player can purchase any supplies that were not bought in Seattle, gamble, or head for either the White Pass Trail or the Chilkoot Trail. The White Pass is longer, but easier, and the Chilkoot is shorter, but harder. The player can also hire packers in the two cities that would haul their supplies to the respective routes. Gambling can involve a card game, Yukon, played in saloons that has rules similar to War, an arcade with a host that tells the player the best place to find gold for a payment of $5; however, the information is only given if the player gets exactly 1000 points, and “find the nugget”, located in Skagway. In this last game, a gold nugget is placed under one of three cups, which are shuffled. If the player bets $1, the game is made very easy. If the player bets the higher amount, the game is rigged so it is impossible to win. When the player’s loss is reported to the bar manager, he “claims” he will get your money back, but actually does not. Gambling can be disabled in the settings.

The Yukon Trail gives players plenty of opportunities to think about the situation, giving many options and many possible consequences for each event, thus building problem solving skills. The initial choice players make on the trail, which can be subsequently changed, is the load personally carried. A smaller load results in the ground moved each day to become shorter (as some of the supplies have to be left behind and then returned for). Moreover, the trail becomes much more difficult to travel when encroaching upon the winter months. However, a larger load will result in a higher probability of the player or partner being injured.

Midway down the trail, the player and partner stop at a camp. They can then buy or sell goods before climbing the mountain pass leading to the Canada–US border where they pay a toll to pass into the Yukon Territory. The North-West Mounted Police will not let them pass unless they have 1000 pounds of food per person.

Along the trail, numerous random events can occur. Random events include: someone being injured (the player decides to continue at a slower pace or to rest), theft of food, rockslides, crowds of people or abandoned animals, and sudden inclement weather.

The player and partner arrive at Bennett Lake after hiking into Canada. While there, they meet the legendary Mountie Sam Steele. During the winter they need to acquire a whipsaw if they do not already have one and then build one of three boats. Once the spring arrives and the ice has melted, the player and partner can embark with their boat. Depending on the date of their arrival at Lake Bennett, Sam Steele will let them depart right away, or have them wait two or four days before departure.

On the river, the speed is determined by the type of boat chosen, and how much damage it has sustained. The choices for boats include a dinghy, a raft, or a canoe. The dinghy is balanced, the raft handles well but is slow, and the canoe is fast but handles poorly. There are a few minigames, which involve guiding the boat away from rocks and whirlpools. After the minigame, if the boat has been damaged, the player can choose to repair the boat or build an entirely different one.

The player and partner will eventually reach Dawson City, where they are presented with a map of claims they can stake. There, they meet Nellie Cashman and author Jack London. Once they have staked a claim, they can begin searching for gold. With the arrival of winter, the game ends. The player’s score is determined by the amount of money they have (from the entire journey, including gold). Most claims will yield small amounts of gold, but at least one claim can get you the high score.

You can play The Yukon Trail online here, in web browser for free!