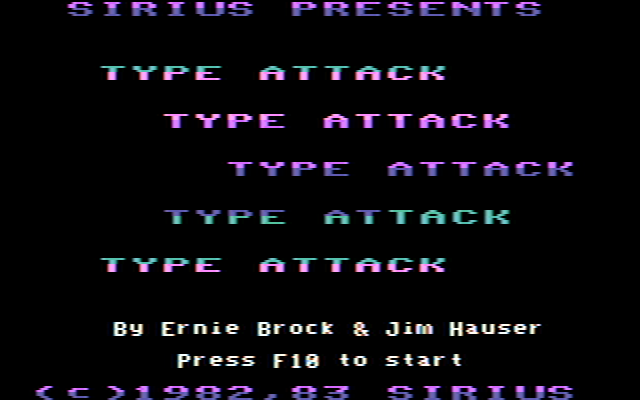 Educational electronic games, which began to appear immediately after the spread of personal computers both in the classroom and among home users, represent not only the quiz or boring for adults "sets of classes". Released at the dawn of the PC era "Type Attack" managed to adapt to such public goals... the famous arcade fighter "Space Invaders".

Instead of the usual aliens we are rampant from the top to attack the evil letters and other bad characters, and to study have, respectively, high-speed their typing on the keyboard: time has not "killed" by pressing corresponding keys enemies reach the bottom of the screen and suck out our precious life energy. But first you will need to use F10 to get to the splash screen in a very rich in options main menu. Using "0" here you can choose the graphics mode: supports only one adapter, the CGA, but in three options palette, "blue-green", "yellow-red" and – Hooray! – advanced "composite"; which is especially nice in the latest full-color version, the text, though loses a little in sharpness, but remains quite readable (and because it is this kind of appearance "Type Attack" and recommended for use).

The keys "1" and "2" are the respectively the speed and level ("number of lessons"), in both cases in the range from 1 to 99 are, of course, best to start from the beginning (do not forget to adjust and configure emulator according to the power of a real IBM PC / XT). As you might guess, with the growth of these indicators play becomes much more complicated: the authors formally recommend to use a speed from 80 and above mostly robots and genetic mutants of the same lessons included with the game are supplied, only the first thirty-nine remaining it is proposed to create, in a special section of the main menu (activated by pressing "3"). The fourth paragraph starts the game; the rest of the options you will need to use significantly less ("5" loads the previous save, "6" for some reason sets the current high score table, and "7" allows you to exit back to the system). Please note only that for successful warfare Caps Lock on!

The appearance of the main screen will be familiar for those familiar with Space Invaders and its clones: on the background of the starry sky from the top down, three "waves" to eight columns on each falling letter (here it is called a "Character Attack") that you want to destroy, fingers poised on the keyboard in accordance with the recommendations of the user's guide - by the method of "blind set". Aim, fortunately, is not necessary: any proper pressing leads to the disappearance of the corresponding character – but only in the bottom row of each column, and if the same are few, then they get deactivated from left to right, thus opening access to the next series. At first we get attacked just four letters – for example, in the first lesson it is A, S, D and F, which recommended to "shoot", training the left hand; the second task is devoted to the right (J, K, L, and semicolon), etc., – in the future the number of opponents increases expected, among them there are punctuation characters that require the use of the Shift key. After we successfully disposed of all three waves of speakers of the individual letters, we expect the mode to "Word Attack": the right to the left on the screen will fly whole words, drawn from the met in this lesson the letters – to eliminate them one by one, typing the appropriate letters in a row and confirming the shot "space" or "enter".

Our level of fighting skill is clearly displayed on the left edge of the screen scale "Words per Minute"; the indicator on the right symbolizes the remaining energy: at first, her stock equal to one hundred units, but each misprint reduces it to 1, and successfully reached the bottom of the screen "wave" of the enemy – just 35. These two numbers clearly displayed and at the very top together with the third counter points: eliminated each letter brings in their piggy Bank 5 units, but exactly the same takes away any mistake; while "Word Attack" followed in the case of error-free data destruction of all of the words "Bonus Word" letters weigh 20 points already. In addition, upon completion of any of the lessons to the player's score is added another bonus received from the works progress indicator "Words per Minute" at your current speed – you can then capture the result in the table of records and go to the next lesson. Should also add that pressing "Esc" will put the battle on pause, F9 will turn off (or back on) the sound (of course, carried out by the PC Speaker), and F10 will exit you from the game, if you want saving your current progress.

Of course, the "Attack Type" is not claiming originality of the gameplay can hardly be considered a masterpiece for all time. However, this game has a lot to offer the modern user, so if you consider yourself a veteran of the arcade genre, why not to combine business with pleasure and instead of the mass extermination of innocent monsters to improve their typing speed to the heights of space? And that's not to mention the traditional rarity: until the appearance in August-September 2018 in the "nonpublic" part of the range of the Total DOS Collection this thing for many years was listed as missing.