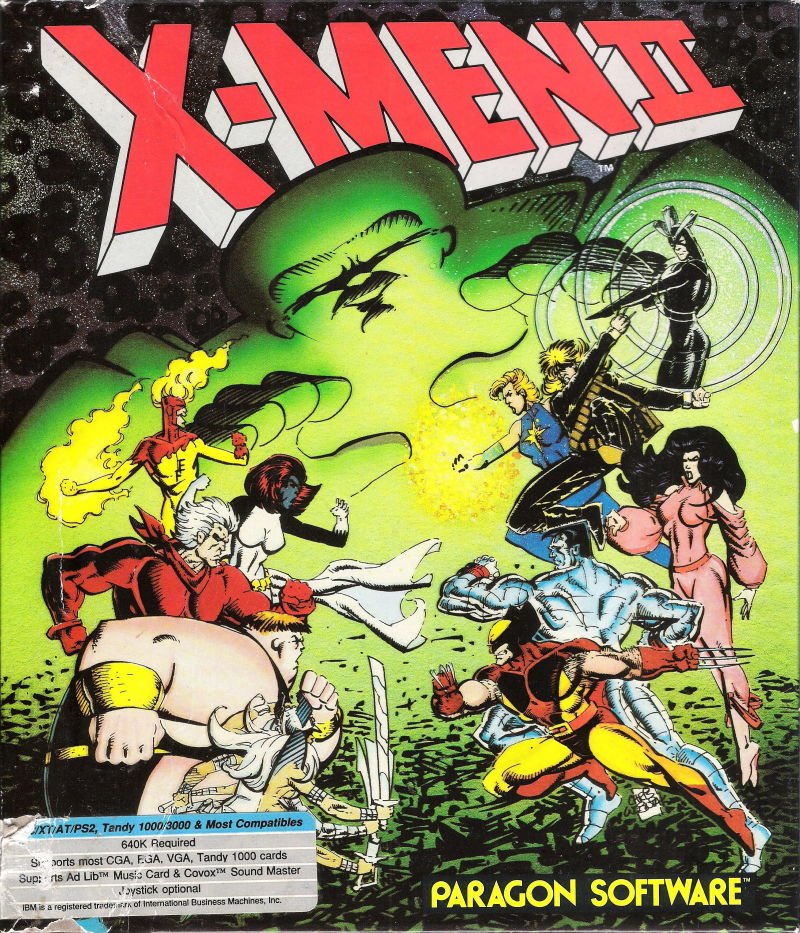 X-Men II: The Fall of the Mutants

Click here to play X-Men II: The Fall of the Mutants online
5 /5

X-Men II: The Fall of the Mutants was launched by Paragon Software Corporation in the year 1991 which was loved by all old and young. It’s an interesting DOS game and can be played online by clicking here.

X-Men II: The Fall of the Mutants description

Relatively fun Rogue-like based on the eponymous comic book series from Marvel.

The representative of the alien race The Watchers interested - what if with glassadam episode of the comic "Fall of the Mutants" was fighting the other part of the star team, not the one that, by coincidence, was back in 1989 in Dallas and rebuffed harmful demon with bezymaynny the name of The Adversary (if you're interested, Uncanny X-Men #225-227)...

Thus, the demon tore a hole between the times, transpirirovat in Dallas chunks of the Stone age, and Vice versa. Ismanam and Co. have to fight not only the dinosaurs and cavemen, but squad Delta Force, consisting of former members of harmful malatskey the terrorist organization the Brotherhood of Evil Mutants. Apparently, the clinical death of their leader, magneto, I did not go to the benefit of their consciousness, and they decided to sell security services. Sold. Now they are choosing the path of three British mercenaries and one alien sorceress, who Exename their scores are going to put us spoke in the wheel.

[N. B.: Apparently, the fact that in the face of common threats in the form of the demon of Freedom Force and our heroes in the original comics United, the authors of the game out of sight missed.]

Structurally, the game is relatively simple in perception - by choosing five of the fifteen proposed for selection of the characters (besides really took place to be at that moment in Dallas (Wolverine, Rogue, Havok, Psylocke, Colossus, Dazzler, Longshot), we added the list lying in a coma (Shadowcat, Nightcrawler) who fell into a parallel reality (Phoenix) and just being at that moment in new York city (the whole team X-Factor - Cyclops, Marvel Girl, Iceman, Archangel and Beast)), we're going to one of the three proposed areas of military operations, to fulfill its goals. We propose to start with the capture of two randomly selected from those present in the Dallas opponents (Mystique, Destiny, Blob, Pyro, Avalanche, Spiral, Super Sabre, Crimson Commando, Stonewall), and will continue to change and affordable areas of the city, and combat missions.

The selected squad we have seen since the height of bird flight. Observing the selected formation (to the extent possible), our brave boys follow the leader, periodically using his strength to overcome obstacles (for example, flying heroes swing through the barricades, shooting and just super-strong - the walls are breached; the rest - to the extent possible (for example, Shadowcat, in full compliance with, passes through walls; Dazzler illuminates the road at night and so on) than can help. Every combat mission is given a certain period of time, and time is relentless. Along the way, changing the time of day, getting dark, getting light and so on; comparatively the most likely is displayed and the visible part of the levels - so, Wolverine sees a little further because of his mutation, Dazzler can Shine his power as Phoenix, but all the rest will go by feel).

For randomly generated levels spread of abstract objects - from kits and ending with unfriendly minded anti-personnel mines. And, of course, opponents. Meeting with the enemy tradecom leads to the onset of the BATTLE!

Combat modes in the game two, we switch between them on the global map on the space bar. In a Side Battle, we see the battle from the side. Badly animated sprites our and Nenashev grapple in mortal combat in the manner of arcade fighting games. The first in our group struggles with their first, second with second, and so on. Each of the fights we progesive separately (switching - by the numbers on the klaviaturka), at the same time in the rest stops until we deal with data. Each character issued by TWO (2) attack, willingly associated with them by force. I warn you once - very freely. If Phoenix and Psylocke obviously Hyper-strong, then, for example, Nightcrawler for some inexplicable reason, easily merges even the weakest navmenu, although it seems like an acrobat and even genius of fencing.

In Round of Combat we have the likeness of a chess Board, where in some semblance of a strategic approach moving portraits of heroes, designed to symbolize their cheburkina on the field of battle. And esessno, give orders, like "attack 1, attack 2", "block", "pass", and so on. It is worth noting that this is what they are called, so the first two times will have to run in arcade mode, even if just to remember that someone is hanging on first and what's second.

Semblance summary: excellent Idea, the implementation sucks. Battle piece are inevitable and disgusting. Spoils all the fun of the process, although there are many useful ideas - like applying those same abilities on the global map. Play - only ardent fans of the comic who are interested in the same question, and have Watcher. The rest of them go to play in a much more modern, beautiful and enjoyable to play X-Men Legends 2, ported the same on PC.

Play your favorite childhood game X-Men II: The Fall of the Mutants online in your browser for free here.