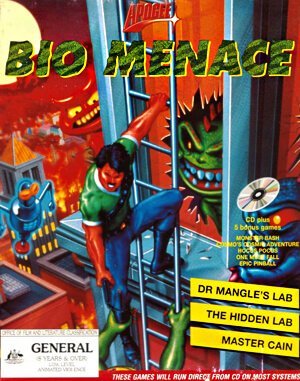 Click here to play Bio Menace online
5.0 /5
The object of the game is to control the main character Snake Logan through the levels of each episode killing monsters, avoiding traps, picking up powerups and bonus items and obtaining key items. Before he gets to the exit he is required to find a crystal shard or keycard. To obtain one he must either rescue a hostage, or kill boss monster. There are exceptions where he can exit without any key, hostage or boss encounter.

Bio Menace is a 2D, side-scrolling run and gun platform game developed and published by Apogee Software in 1993 for MS-DOS. It was built on a licensed version of id Software’s Commander Keen game engine, and was known as Bio Hazard during production. Play Bio Menace online!

The CIA has learned that gigantic mutants are wreaking havoc in Metro City and their sources say that the destruction is caused by a scientist calling himself Dr. Mangle. For this reason, they send Snake Logan, the CIA’s top secret agent, on a dangerous mission: fly over Metro City, investigate what’s going on, then report back to the captain. Unfortunately, Snake’s plane is shot down, forcing Snake to walk the streets and kill mutants.

There are three episodes in this game: In “Dr. Mangle’s Lab” and “The Hidden Lab”, Snake must destroy two labs and Dr. Mangle himself. Just before he dies, Mangle tells him that he is forced by somebody known as Master Cain to do his bidding, or he would be killed, so in “Master Cain”, Snake sets out and destroy the creator himself.

All three episodes use the Commander Keen engine, which id Software used. It has a similar score box located at the top-left of the action screen, same menu system, same on-line help, and the same start-up screen where the game detects your sound card, video card, I/O devices, and the amount of memory you have. It even allows you to view the old status screen if you press [Space] during gameplay.

But the only differences are that Snake has eight units of health, so each time Snake collides with a mutant, he doesn’t get killed straight away unless he had one unit left. There are 12 levels in each episode. When you start a new game, as well as choosing the three difficulty modes, you get to practice every level except the very last one, which is the episode’s final boss.

Snake can use more than one weapon. For example, beside his trusty machine gun, he can also use lasers to fire through mutants, place land mines on the ground or throw grenades to blow them up.

Snake has to make his way through each level by blasting mutants while finding the exit. But to find it, he must first free a hostage located on each level. Some parts of each level are blocked off by a laser gate, and these include passages where the hostages are kept. To turn these off, Snake must search for a keycard or a crystal shard. There are lockers which store these, and can only be opened by obtaining gold keys.

Also in these locked doors are goodies that can boost your score, which could give you an extra life. You can also get an extra life by either collecting 50 gems or a mini-Snake. A few of the levels have a color sequence. This involves finding five different colors in a line, and then finding five switches that must be flipped in the correct order that corresponds to the sequence of colors. Doing this will allow you to get goodies that add many points to your score. However, failure to switch in the correct order will result in Snake falling down a pit of spikes or toxic waste. In some areas, you can also get a flask full of liquid that will make your invincible for 30 seconds. As normally, it does not work when Snake falls down a pit.