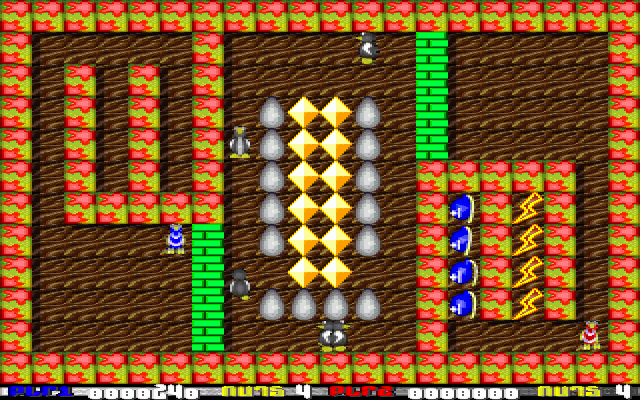 Click here, to play the famous game Penguin Tower developed by - in the year 1997 and enjoy! Remember do not get nostalgic!

Friends! With great joy we hasten to inform you that the collection of artifacts found by the team Old-Games.RU, added another gem. We face is not neglected at the stage of development of the "billet", but it tested beta-version of the game (however, for this reason, it is impossible to guarantee its stable and painless performance), which bears the mysterious name of Penguin Tower. The genre of the game can be described as a hybrid of arcade and puzzle, and the gameplay is extremely reminiscent of the legendary Bomberman'a.

Having such a fancy name, the game, of course, is based on no less funny story: two parrots, Dinsdale and Ruby needs to save his world from the evil penguins who want to turn everything around in a giant snowball. Abode monochrome birds and the root of all evil is the same "pinguicula tower", each floor of which is represented by a separate level. This will clear by means of bombs our colorful heroes!

As usual in such games, the main method of destroying enemies is the dropping of bombs on their way, and to increase the power of explosions and multiplying the number of charges used at one time (and other easy play features), there are different varieties of bonuses. In Penguin Tower such nice objects there are several dozens, but to call the game easier its ancestor language does not turn: the penguins meet a minimum of obstacles in your path, which leads to very frequent collision with them, drawing them... you know what! Moreover, the levels is a lot of eggs to explode which not only make sense, but dangerous: every time the shock wave changes the colour of the eggs and increase the speed of the penguin, which sooner or later will hatch out of it. In short, the poor parrots under your strict control to be able to run a lot, destroying its although very remote, but is also feathered relatives. If you deal with the enemies alone does not work, you can always call someone for help, because the game provides the NSA for two people.

The schedule is made bearable, even for its time (but the desire for more leaves from the first minute), the musical accompaniment is very fast, sometimes even haunting, but it also specifies that the right tempo of the game. Prepare to be that to master even the first level will be possible far not at once – Bomberman compared to Penguin Tower will seem like child's play. If you are not afraid of truly "hardcore" nature of this game - you honor and praise. Share then results.