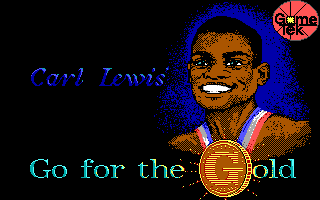 With many different features and various levels, Carl Lewis' Go for the Gold released in 1990 hit the right chords right from the beginning. Play this excellent Action game and online now.

The extremely little known "first" version of the game, named in honor of an outstanding athlete (that are released before the famous Carl Lewis Challenge), which is essentially a collection of mini-games on the theme of athletics.

There are different competitions: running 100 m, javelin, pole vault and so on. If you compare the game with the "second" part, then the main difference is much less complex gameplay "first" compared to "second". In terms of graphics the game is very beautiful for years after its release (almost always from the side, parts of the environment made very clear), but unfortunately, the game Carl Lewis Challenge, which was released later and is in fact repeatedly improved and expanded its option, makes this game interesting only for collectors of sports games or the biggest of their fans (on the other hand, simulations of athletics is extremely small, so that the value of the game is, in any case).

Do you want to relive your memories and play Carl Lewis’ Go for the Gold online in your browser? Play it now for free.

Gateway to the Savage Frontier