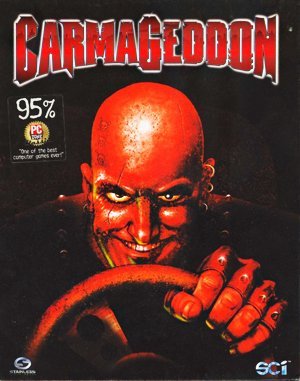 Click here to play Carmageddon online
4.2 /5
Carmageddon is an infamous racing game that puts the 'laughter' into the phrase 'vehicular manslaughter.'

Carmageddon is the first in a series of graphically violent driving-oriented video games produced by Stainless Games and published by Interplay and SCI. It was inspired by the 1975 cult classic movie Death Race 2000. Play Carmageddon online!

Carmageddon is a violent car racing game where the racing element can be equally important as wrecking opponents’ cars or gathering kills by ramming into pedestrians. At the beginning the player has only one car and is ranked at #99. The overall objective is to race all the way to the top, collecting the opponents’ cars on the way as trophies (and possibly replacements to one’s vehicle). In the race itself the player tries to damage opponents by driving into them, and can also kill pedestrians.

Damage, kills and spectacular moves earn credits for upgrades and even making repairs to the car at anytime during the race. If a specific opponent’s car is wrecked multiple times in successive races, it is added to the choice of available vehicles. There are many power-ups strewn around the courses that range from useful (more speed, instant brake) to fun and downright absurd. Though the player can win by racing by finishing first, wrecking everything in sight is encouraged. The game offers open environments where exploration away from the racing course is encouraged.

You can play Carmageddon online here, in web browser for free!