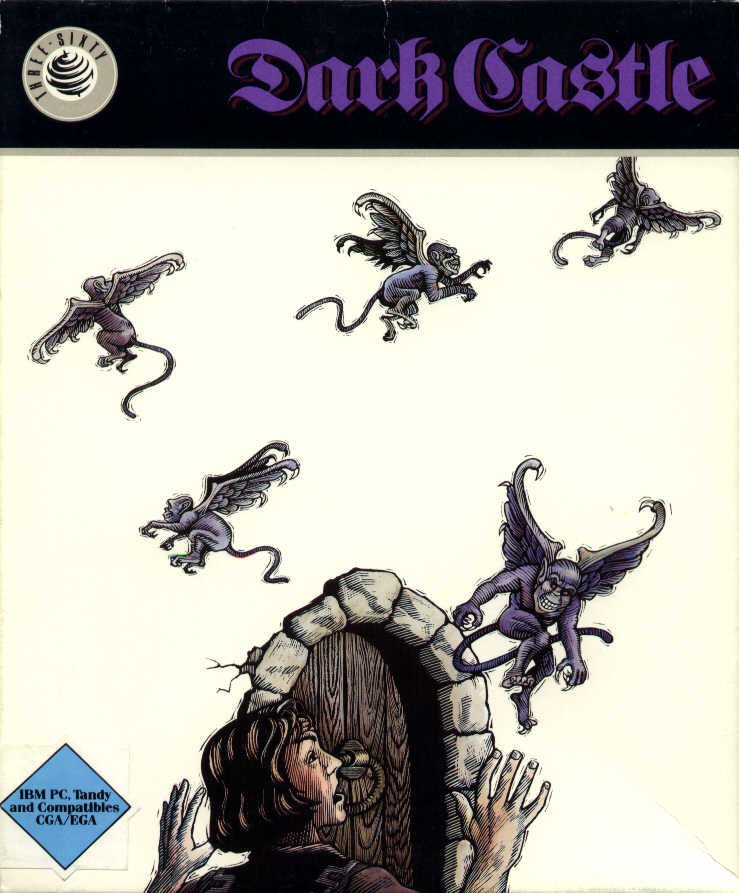 Do you want to relive your good old memories? Play Dark Castle again, it’s a perfect DOS game launched in 1987 and a must-play for all video game lovers.

A platformer with a side view in a medieval-fantasy entourage with unusual particularities of the gameplay.

In this game you will be reincarnated as a peasant (this is important!), who decided on a desperate and defies logical explanation act alone to go to storm the castle of the Black Knight, brutally oppressing the surrounding villages. This castle is well fortified, with multiple floors, underground tunnels and traps, and it is inhabited by a variety of monster – a servant of a Knight. But, nevertheless, our hero is there still went... At first glance, the gameplay is standard – moving through the castle, destroying enemies, collect power UPS (lives, health etc.). But only at first glance.

A few unusual moments. First, there is the so-called "screen monsters", on which you can immediately see which species live in the castle and how one's health (I must say, the ratio of odd: so, a bat "hit points" almost the same as the guard-man, and a hefty man with a whip (!) it is not weaker than the dragon). That is, a single monster (except the Knight) for we would not be surprised – both good and bad at the same time. It is also important to note that the enemies here are very prone to rebirth. However, coming back here almost not necessary, usually you just need to overcome specific screen. By the way, at level 4 , and each much harder than the previous in all respects.

Secondly, the game made a very bold (but surprisingly reasonable) assumption that once our hero is a peasant, he's just nowhere to take up arms. So the weapons in the conventional sense in the game at all. Only the stones. Normal stones that you find on the street and throw them at someone. And throws them our hero wow as well, and the problems with finding them in the actual castle, as it turns out, no.

The game is two-dimensional, but sometimes on pseudoreference forced to recall more than a kind of the trajectory of the stones they can throw anywhere, even back, a little "aside" - at 360 degrees, in one word. Looks unusual. No less strange are the transitions between locations – from the throne room we can get into the courtyard, the dungeon or even in a trap (there are such surprises to ground). But the biggest surprise will undoubtedly be ways of movement and the surface, which will have to move often will have somewhere to climb ropes, ladders, and even "fly" across the chasm on some kind of stick levers...

Graphically this thing looks decent, but relatively monotonous (but only with respect to all of the same premises, sometimes very different each other), which in this case is normal: after all, the castle of the villain, the tyrant, probably, have to be drab and boring.

But the overall impression is very mixed. On the one hand, of course, a classic of the genre (if not "Golden"), received in his time a lot of positive feedback, non-trivial gameplay, nowhere really over the common combat system, with other objectively difficult passage, the inability of melee and a strange feeling from happening. Like and beautiful, and interesting, and the real joy there. But still the overall assessment is more than positive, fans of challenging platformers should definitely try.

Now, play Dark Castle online for free on your browser and make your boring weekend fun and full of entertainment.