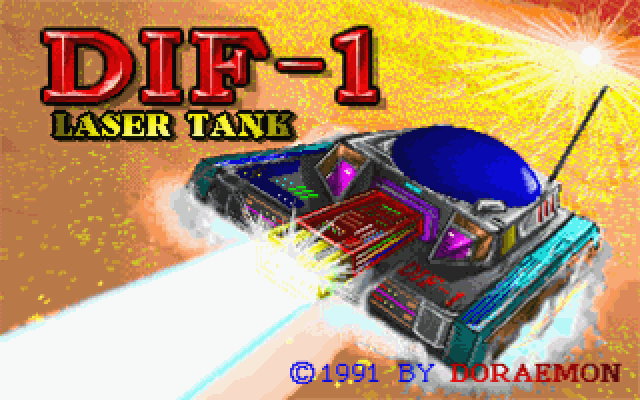 In 1991, a DOS game was released by Softstar Entertainment. The game was called DIF-1 Laser Tank and belongs to Arcade genre. Play it online by clicking here.

An interesting combination of format vintage tank game Battle City with some elements from the not less ancient Bomberman. Besides, this arcade creations from SoftStar is a detailed and colorful story that 1991 looked quite even chic...

As expected, with the development of human civilization, the Earth finally got its own space defense network EDGS, consisting of 8 major stations symmetrically placed in a high orbit. The network ran a supercomputer named Gardilicia, who gave all the orders combat robots. The system even had the ability to produce for their tasks biomechanical materials. But everything comes to an end. One extremely angry biorobot named Sandan took the same management system, and now above the Earth hangs a terrible danger. But there was only one hope for salvation – the experimental military laser tank DIF-1. And that's a modest guy named lemon - he wears dark glasses and works in the company SRD - was immediately ordered to sit in the tank to go to destroy the enemy. Lemon just asked the management for a few minutes to see last time with my girlfriend. In parting, he says to her touching words: "good-bye... and don't wait for me, it's a deadly mission – a one-way road...".

The game is a typical "tanikawa", and the action takes place on a square map divided by all sorts of strange moves. A partition of these moves can be of different types: destructible or not destructible; these walls sometimes contain bonus. Enemy tanks come in size small, medium, large and unwieldy. Maps are a kind of different stations battle stations EDGS that should smooth out DIF-1. The level ends when on the map there will be no one "tank". Then you picks up the Shuttle, and begins execution of the new mission. Enemy tanks can shoot lasers or rockets. Types of attack your DIF-1 only two: shot with a laser beam (Alt) and the cloud of explosion (Ctrl). The first type works in a straight line from the tank, and the second operates in the following manner: around the tank explosion created a large cloud moving, searing everything in its path. For the second type of attack requires a special charge, which is represented by an icon in the shape of a cross. You can also pick up the charges for the force field (the light with a thin yellow lines). "Life" originally only three, however, earn points, can significantly extend the game at the expense of "life", taken on credit. Several levels are combined in a location that is usually drawn in the form of the space station on a colorful figure in the briefing. As you progress and collect bonuses slowly increases the power of your laser tank.

The graphics is bright and detailed. What else can you expect from those times when the professionals have worked on the image, each pixel? Looks especially beautiful long storyline introduction of animated graphics, so do not rush to press Esc immediately after you load the game. The screen resolution is only 320х200, resolution, color 8bpp. Nice musical themes are very many and they are all different for each level of the game.

The game is developed and published in Taiwan, and one screensaver (which is only in the Intro) "crowned" four characters. However, with all due respect to the ancient Asian literature, and language properties of this particular game meet exclusively English. Briefings, dialogues in the Intro and the game menu – all done in English, so any player will enjoy the gameplay, and probably will be DIF-1 entirely, it would wish. And DIF-1 in 1993 there was also a continuation – Mirage Thunder DIF-2 from SoftStar. This is a vertical scroller shooting game with colorful graphics and space the story part and made he was entirely in traditional Chinese. About the game Mirage Thunder DIF-2 on the pages of our website there is quite another story.