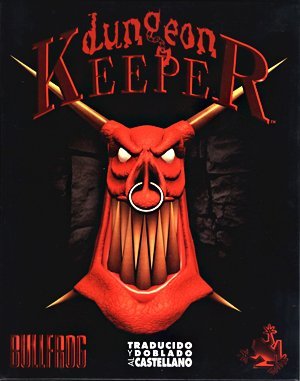 Click here to play Dungeon Keeper online
4.0 /5
With the tagline "Evil is Good", Dungeon Keeper invites players to channel their inner dungeon master by building and sustaining an underground lair replete with evil minions and devious traps, with the ultimate goal of overthrowing the sanctimonious Lords of the Land.

Dungeon Keeper takes real-time strategy into a fantasy setting. You command a dungeon and its hellish minions, and must take them to glory against the hated good guys. You must use your gold to build a fortress and weapons to attack. Play Dungeon Keeper online!

As well as being able to rotate the 3D view, and control the light source, you can enter the direct viewpoints of your men, to see life through their eyes (one character’s mode goes into black and white for this).

As in many RTS games, players interact with the world of Dungeon Keeper through an isometric perspective. From here the player is able to exert their influence through a mixture of indirect commands as well as direct interaction. The basic peon, known as the Imp, is the general-purpose workhorse, and the only creature that is unerringly loyal to it’s keeper. They will perform any given task without question, with their main duties being excavating and claiming land in addition to gold mining. On top of setting general goals for Imps, like tagging areas to be mined, the player can manually pick up and drop Imps and other creatures near tasks they wish them to perform.

The main objective at the beginning of most levels is to create a dungeon of such magnitude and grandeur as to attract several types of powerful minions to one’s cause. Minions will generally enter through any claimed Portal, with one usually being situated near the starting point. Once there, creatures can be made to engage in several activities such as producing useful spells and items for their keeper or training in order to become more powerful. Training and the like requires gold, and creatures themselves will expect to be paid periodically, so a constant influx of gold is necessary to prevent creatures from becoming upset or stagnated in their progress.

Once sufficiently powerful, a keeper must defeat the opposition, which consists of heroes, enemy keepers, or both, depending on the level. While heroes do not create dungeons and thus cannot replenish their numbers, keepers are theoretically capable of creating a self-sustaining dungeon just like the player, though in practice they have several exploitable tendencies. Once all foes have been defeated, the player is given the choice to continue development of their dungeon before progressing to the next level by hitting the space bar.

You can play Dungeon Keeper online here, in web browser for free!