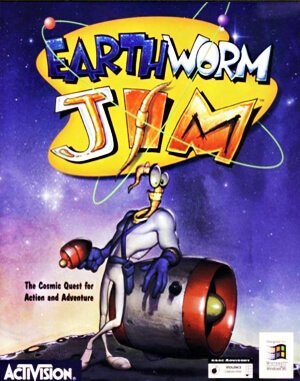 Click here to play Earthworm Jim online
5.0 /5
Created by the twisted minds at Shiny Entertainment (led by Dave Perry and Doug TenNapel), Earthworm Jim is a nonsensical side-scrolling platform game that allows the player to venture through the galaxy as an earthworm trapped in a futuristic space-suit to rescue Princess What's-Her-Name.

Jim is a normal earthworm, until a special “super suit” falls from the sky and allows him to operate much like a human, with his “worm-part” acting as a head and the suit acting as arms, body, and legs. Jim’s task is two-fold, he must evade the game’s many antagonists, who are after him because they want the suit back, and also rescue and protect Princess What’s-Her-Name from them. The game plays out with Jim eluding and defeating all enemies, and saving Princess What’s-Her-Name. However, not only does she not return Jim’s affection, but she is also crushed by the flying cow that was launched at the beginning of the game by Jim himself.

A crow is chasing a worm named Jim while in outer space Psy-Crow is chasing a renegade ship. The ship’s captain has stolen an ultra-high-tech-indestructible-super-space-cyber-suit and Queen Slug-for-a-Butt has ordered Psy-Crow to get it, since it can make her more beautiful than Princess-What’s-Her-Name. Psy-Crow blasts the captain and the suit falls to Planet Earth.

Back on earth Jim wonders if he is finally safe when an ultra-high-tech-indestructible-super-space-cyber-suit lands on him. Luckily Jim rests in the neck ring of the suit. Then the space particles begin interacting with Jim, causing a light-speed evolution. Jim soon realizes he is in control of the suit.

You can play Earthworm Jim online here, in web browser for free!