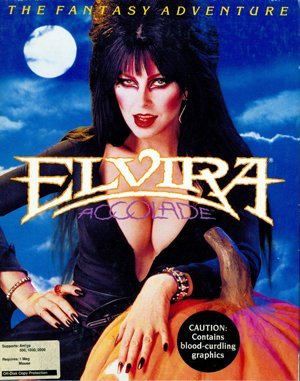 Click here to play Elvira: Mistress of the Dark online
5.0 /5
A horror themed adventure game based upon Elvira.

On the demise of Uncle Elmo, Elvira inherited Castle Killbragant. However, the castle is full of monsters. When she visited the castle she was imprisoned by the various creatures returning from the underworld. The player, an amateur ghoul-buster, has to help Elvira escape. Players must find six keys to open the chest an dispose of the creatures that are encountered. In doing so, players explore her enormous castle. There are towers, dungeons, catacombs and gardens; all locations connected by doors and pathways.

This game features dozens of different death sequences. If the cook in the kitchen kills you, for example, you can see your head floating in her cauldron. The game also has a real-time combat system. You have to time your attacks and blocks in order to defeat the enemy.

Elvira was one of the first mouse games touting the sophisticated modern nature of its “point and click” interface. Icons for examine, mix, pick-up, and other context sensitive commands allow the player to manipulate the environs of the castle. Magic spells are used to improve skill in combat and advance the plot through solving object-oriented puzzles.

To move around, players click on any part of the screen or click on one of the highlighted direction arrows. The latter moves the player forward, up, or down in the direction they are facing; the left, right, and back arrows change that direction, and redisplay the perspective from it.

Armed guards will attack the player as well as monsters. When attacked, the game switches into combat mode. Fights are seen from a third person view; in combat mode, players only have two options – trust and parry.

You can play Elvira: Mistress of the Dark online here, in web browser for free!