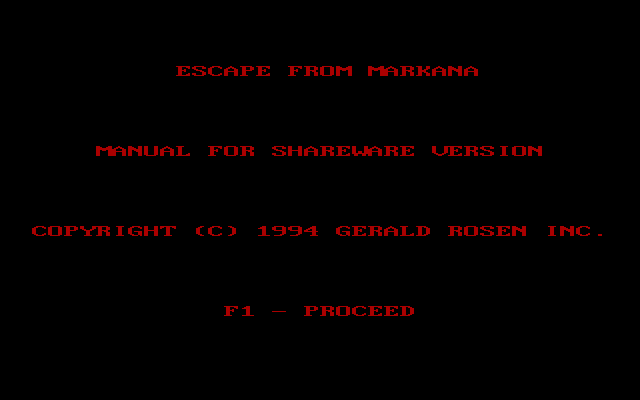 Escape from Markana, a top-notch Action game was developed by Gerald Rosen Inc. in the year 1994. This was a very famous and in-demand DOS game. You can play it online here again.

Shareware game with a side view that is difficult to attribute to a specific genre: it has elements of action and adventure, puzzle and even survival simulator.

The main character in obscure circumstances is a prisoner of the government of a totalitarian state Marquand (details, alas, not explained). One day after the interrogation, in which torture he lost consciousness, the hero finds himself in a dark labyrinth and decides to try to escape it, though, and realizes that he was left here intentionally - to certain death. Any guards or people in General around there, but plenty of other risks, from clever traps and evil animals (e.g., crocodiles) up to all sorts of obstacles like blocking the way, and deadly. Initially, our character is not armed, but to succeed in the game weapons will have to find; however, finding a way forward and a solution to this, all sorts of non-obvious puzzles for this game is much more important than rare fights. To increase your score, you can also collect various bonuses, treasures (gold bars, diamonds, and so forth): their types and the number of points given to each are displayed before the start of the game.

Graphically such a seemingly interesting game looks very homemade and, though neither can talk about oldgame, pathetic: we expect the infinite black screens without the backgrounds, each with usually three long platforms, one of which is a hero (clumsy fellow with red hair and really no facial features), and some objects on these platforms. Please note that if, for example, blocks, hanging somewhere above and is able to kill you, to see really, that is virtually invisible traps. However, the number of "lives" here in General is not limited, moreover, you can save the game (though there's only one save slot). The verdict to make difficult - the thing is, this is difficult, but difficult in first-obviousness. The interest is primarily historical - well, real, but only for those who love a truly unusual game of people who are not afraid to the same total monotony.

Relive your old memories by playing Escape from Markana free and online on your browser now.