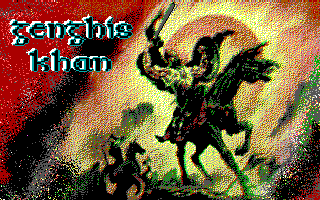 Genghis Khan was launched by Positive in the year 1991 which was loved by all old and young. It’s an interesting DOS game and can be played online by clicking here.

One of the first and probably the best (but, unfortunately, almost forgotten) hybrids of arcade and strategy.

Who is Genghis Khan when he lived and what he did, all should be known since elementary school, so it will not. The game begins in a time when Mongol clans have United and are preparing a campaign against China. The game anti-historical, but Oh well.

The essence of the "plot", if it can be called that word, that is. The way China blocks Genghis Khan Great Wall of China – lightly armed soldiers can not overcome this barrier. Way – to blow up the wall (I know that you now want to say, but our guilt is not here – it's just a game). To do (the authors are very grossly abused in history, Yes), it is necessary to China to conquer the Arab Caliphate in order to gain access to gunpowder, which in this game was not invented by the Chinese and with the help of which you can blow up part of the wall. It remains only to say one word: "hmm".

But if we forget about the scene distortions, then the game itself as just such a miracle as well. At first glance – before us is plain old strategy. But no – because the real steppe Khan must constantly prove to his subjects that he is the best warrior. If long time will not be fights with your participation – your popularity among the people to fall heavily, and the consequences can be very sad.

In practice it is arranged so. Once we come to some territory, we give the choice to win if it's strategic or arcade mode. With the first all is clear – choose on the map the specific area where you want to invade, and move there a part of his troops, if you want to try to find out how many troops of the enemy, - pre-send up of a spy.

The second mode is quite interesting. When selected, the game switches to a fighting mode with the side view, where our "hero" Mongol warrior indicates a Mongol army. One unit of health is five Mongolian soldiers, consequently, his health will be so great, how many troops we will send to the conquest of the country. Accordingly, the enemy soldier is the enemy army, his health – also the soldiers of the hostile country, if we win something our land. To ignore such contractions, as mentioned above, completely in any case impossible. Keep in mind that very often you will be expected not just fighting, but a real platformer with lots of enemies (private enemies).

Graphically it looks average, although in arcade mode are pretty pretty backgrounds. The verdict to make it difficult – on the one hand, the game on the idea if not brilliant, it is more than unusual, especially for its time, with another – it is unclear what target audience it is intended, because, to be quite honest, neither of the two game modes there are not brought to mind (one might even say that it's "play for anybody"); and, of course, truly offensive to any educated person ahistorical. However, to try this rarity at least looking for unusual rarity definitely worth it, and your eight points of the game earned exactly.

Not sure how to pass your time, why not play our classic videogame Genghis Khan online? And the best part, it is for free!