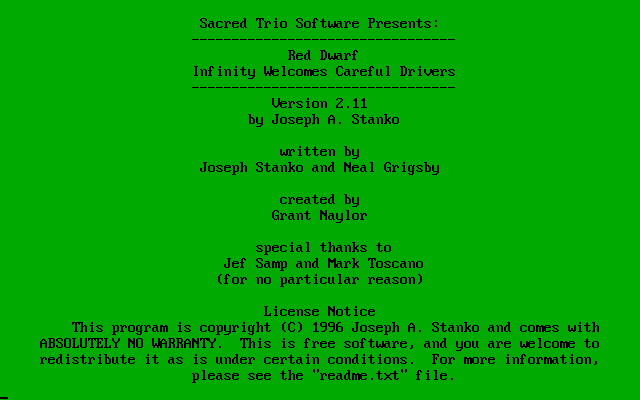 In 1996 Sacred Trio Software released Red Dwarf. The game was an instant hit among all and played for years. Play it again online now.

A text adventure based on the cult BBC series Red Dwarf. The main character is Dave Lister, the only surviving man on a giant spaceship Red Dwarf who spent 3 million years in stasis. The game describes a small episode in the long journey of the main character home.

Graphic design of adventure there, but the detailed descriptions give a good idea of the location. On the mechanics of Red Dwarf is not different from other text adventures. In the presence of a common set of commands to move and interact with objects that can raise, consider or otherwise use. You can also use abbreviated commands, e.g. "N" instead of "North" or "W" instead of "West". Dave has a bottomless inventory, which you can invoke with the command "inventory". Also the commands "Save" and "Restore" accordingly, it is possible to save and load the game .

For every successful action, leading to the end of the game, you get points for every unproductive action these points decrease. So if you take the game slowly, going through many options, the points at the end will be a little bit.

Of course, a text adventure without graphics support for 1996 is not very relevant, but a true fan of red Dwarf or text adventures (or both) it does not hurt to enjoy the game.

Not sure how to pass your time, why not play our classic videogame Red Dwarf online? And the best part, it is for free!