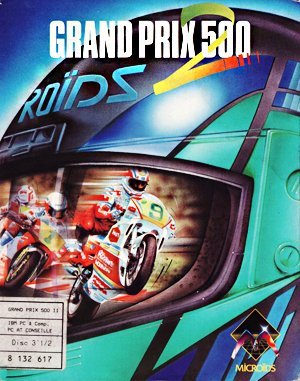 You can choose between 4 bikes, 12 tracks (including favourites like Brno, Suzuka and Spa), with 1 or 2 players in this Grand Prix motorcycle racing simulation. You can play a full season including qualifying modes, a single race, or simply practice a circuit to learn it and master the controls. Like the first Lotus game the game always uses a split screen; in one-player mode the top half of the screen displays the track map. Play Grand Prix 500 2 online!

Before you start playing, you can choose between cga, ega and vga graphics. Unless you want to destroy your eyes choose ega or vga, or start the game from the gpv.exe file. After that you can choose to play with sound. (I was not able to get the sound working in dosbox). If you have a SB soundcard, use it. Others should try to avoid sound unless they want to hear the annoying pc speakers. Now you come to the menu which is boringly colored. Here you can choose the AI level, number of players, the control device – keyboard or joystick (which I wasn’t able to run). Unfortunately the controls are predefined so you can’t change them.

After you’ve decided you can choose between four bikes, and the only difference between them is color. You can choose between 12 different tracks in the game, some of them are well known (like Suzuka, Silverstone). There are three play modes supported in the game – training, race and championship. The graphics in the game are OK, but it becomes repetitive – so does the game, which has a lot of bugs. So it can happen that your opponents float in the air, or pass through each other etc. One of the bigger stupidities of the game is that you can’t see the number of laps that you’ve passed. If you play alone the game is too easy. Even on the hardest difficulty I left my opponents by half a lap, and believe me I’m no Michael Schumacher.

You can play Grand Prix 500 2 online here, in web browser for free!

Moraff’s Dungeons of the Unforgiven