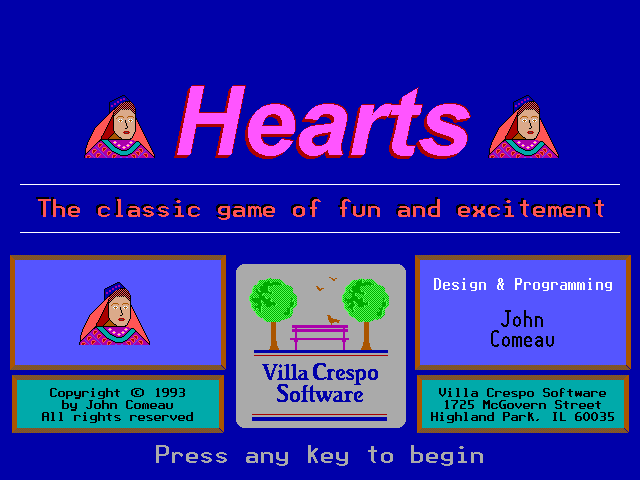 With many different features and various levels, Hearts released in 1993 hit the right chords right from the beginning. Play this excellent Tabletop game and online now.

The second of the games John Como, republished after the original appearance in the Shareware status as one of the latest editions of casual-budget "coffee" series from Villa Crespo. This time we are invited to let the card game, but not from the repertoire of the casino, and Vice versa - very peaceful and family: "Hearts", it also "Hearts", widely known throughout the world not least because of Microsoft, from the beginning of 1990-ies to fit version of this game nearly all versions of its publicly favorite operating system Windows™. To pay attention to yet another embodiment of the "Hearts" should at least by virtue of its rarity: until 2017 the digital version of this thing was absent in free access.

The above did not mean that "Hearts" is devoid of any other advantages. On the contrary, this game has everything you'd expect from the work of John Como and Villa Crespo Software: large and clear graphics on a blue background, a convenient and friendly interface is constantly displayed at the bottom of the screen and signed keys management, detailed documentation – and of three types: short printed, more fundamental electron-textual and equally impressive in-game, along with the usual help screens F1, tutor for hints of progress (though a few questionable credibility compared to the "serious" gambling-the name of Edward Thorp, or Stanford Wong) and even tables with charts and analytical statistics, whatever no-frills look of these supporting elements in relation to family game, completely devoid of the annoying signs $$$...

Built-in helper, in addition to display tips on the screen, and even voiced, with forces including the PC Speaker, although the quality of playback on this device synthesized of items recommended for travel card, which is issued by pressing F9, will, of course, to concede that the proud owners Covox or Sound Blaster (but, unlike "Amarillo Slim 7 Card Stud", the latter option normally works everywhere, including the emulation in DOSBox). There is also music in the form of two separate topics, for the title menu and everything else, but the last song, consisting of only a few recurring cycles, and pulls right off. Can admire the portraits of virtual partners of rivals (especially cute in SVGA mode), even coupled with biographies: they are only six, but the party needs to choose three, at the same time, having defined the profile of our own protagonist is male or female.

Playing "Hearts" only four of us, and in this computer version animate participant can be only one. The rules are relatively simple: at the beginning of each round, everyone is dealt 13 random cards, after which three of them will need to pass one of the rivals, at the same time getting the same amount of "extra" from the other (the order of transmission is determined by the order of the parties: first we reset their cards in a clockwise direction, that is, the neighbor on the left, second – right, third – party, located opposite; in the fourth round of exchange is not happening, and then all repeats again). The game is, with one important exception, in an effort to get rid of the card suit "hearts" (they are marked in the title with the symbol "heart"): the course consists in alternately placing players on the table one card and following clockwise, each must discard to choose any card of the same suit as the first of the four appeared, and if such will not be then any other.

Treacherous hearts are allowed to put in the last turn and not at the first move, if there is anything more suitable; the player who put the highest card (this takes into account only the "main" running suit!), takes all four – but not in the arm, as it were, in reserve, receiving one point for each draw a card Chervov plus thirteen for the Queen of spades, and then goes first. The round continues thirteen moves, until each participant has not exhausted the initial set of cards; after that there is a final scoring, and is already mentioned an important exception – if the current party someone managed to collect all the hearts and Queen of spades, 26 points to him not only not added, but rather subtracted (which, as you might guess, is a very desirable result and a big step to the final victory). The game ends as soon as one of the four present after a series of rounds reaches 100 points (although this number, along with some others, you may wish to change in the settings): the winner is the one whose expense the least.

Yes, "the Worm" in General and "Hearts" in particular, everything is simple and straightforward – but it does not prevent to recognize this incarnation of the popular computer games are very cute and comfortable for use, recommending it even to those fans-oldhamers who are familiar with the more modern implementations.