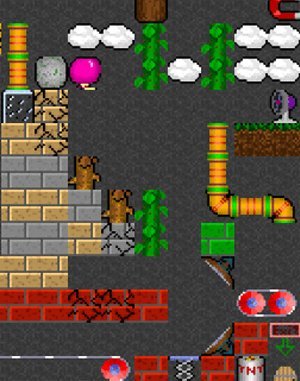 Click here to play Hubie online
5.0 /5
Hubie is another puzzle game where the object is to get to the exit of each level. To accomplish this, Hubie can break objects with his head, climb, "copter" short distances, push or blow objects, bounce on trampolines, use magnets and fans to push or pull objects, and ride on balloons.

Hubie is a single player platform puzzle game, where you control a small round figure (named ‘Hubie’) with legs and antennas. Play Hubie online!

The game puts Hubie in a series of rooms with block obstacles between him and an exit, and the objective is to push, break or bypass these objectives in whatever way possible and get to the exit for the next room – there are 17 rooms in the unregistered version, registering the game adds 100 more plus some new objects like mirrors that can reflect light beams.

Hubie can break some objects by banging against them, he can push objects (but not pull them – only magnets can do that) by blowing air-puffs against them, he can climb objects, and also use his antennas as helicopter-like rotors for short flights. Springs can be used as trampolines to jump higher, and there are also balloons, fans, explosives and magnets among other things to move objects and help Hubie escape the rooms.

The wide array of actions that Hubie can perform and objects that he can use make for fun and varied gameplay, and the difficulty level ranges from levels for children to levels that are challenging for the smartest puzzle solvers. The graphics are decent, too.