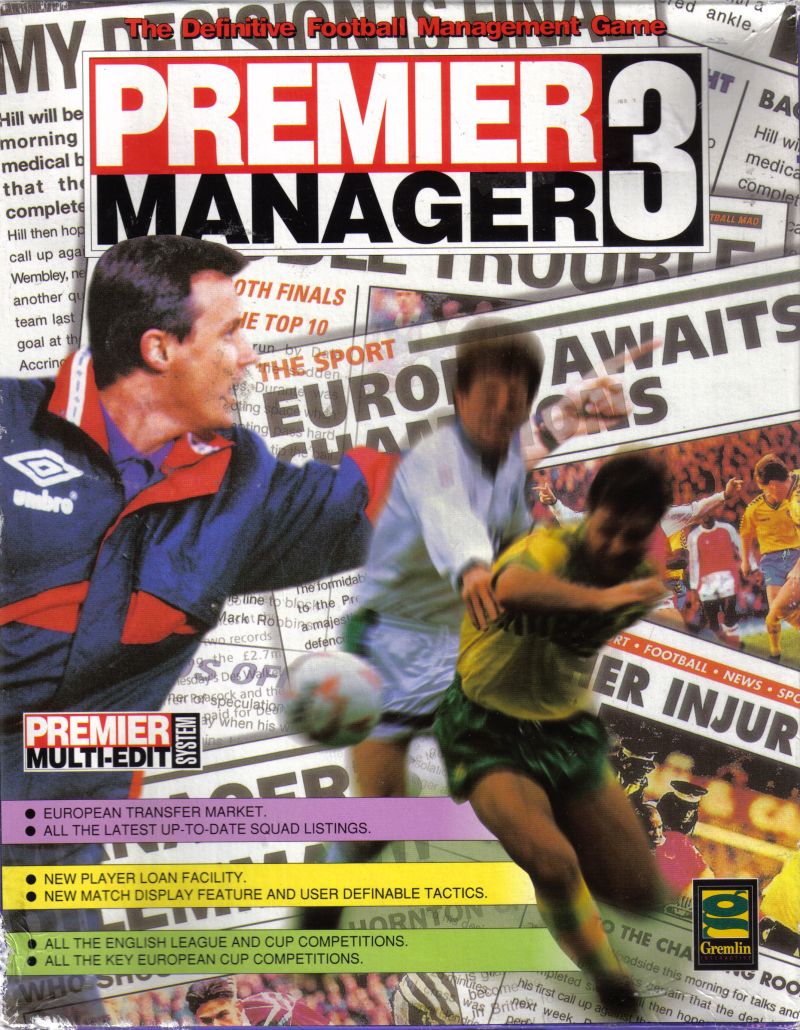 With many different features and various levels, Premier Manager 3 released in 1994 hit the right chords right from the beginning. Play this excellent Sports game and online now.

The third (and best) part of the series of football managers, that is, a game in which paid much more attention to managing a football team than the actual games. The team we have is not really known (the game has no accurate reference to the real teams), but eager to break into the English Premier League.

The main part of the gameplay here – it's training and negotiations. Negotiations are underway with sponsors, other clubs, which we sell and which to buy new players (on your team you can sell to anyone), there is a possibility of contact with our players directly. Also plays a big role in communicating with the "younger" the coaching staff – you tell them that should pull up on the workouts with the athletes, or give any other orders (for example, you can give talks and the search for new players who some of them are in maintenance). In addition, there is also the management of the stadium, where there are games (and even plan the assignment of rooms the interior). The main innovation of this version (the third part of the series) – introduction of the so-called Assistant Manager, that is, the first Deputy of your person in the game who can be entrusted, say, entirely to do the exact same workouts. But it is better to control all processes.

By the matches of attention paid, too, enough, though less of course than management. Tactical schemes are very diverse and detailed, you can control the position of each player on the field relative to the ball (but only control the situation, not the player, it's football Manager). The match itself is shown to us in isometric perspective, though fairly detailed, but most importantly, he summed it up with a repeat of all the most important moments. If your team lost, then such a system will allow for a detailed "analysis of errors". However, the players hard to call anything like a realistic, unfortunately.

In the game there is no "career" coach, or any final. To get into higher leagues and Championships, but the game does not end. You, however, there are three rankings that are formed throughout the game depending on the results: organizational skills, love of fans and love from the owners of the team, and the third ranking is the most important because if it drops too much, then you will be fired. It would seem – this is very strange: which are the Director, because we are the king and God? First, it looks like this: probably not a coach may be engaged in signing of contracts with sponsors, improvement of the performance of the stadium (until the construction of extensions and improvements of the soil of the field!) or planning of the advertising revenue, but our government, alas, is not absolute, and some virtual "Director" constantly watching over us and can in an instant to stop our activities. It is insulting and unrealistic.

The graphics are good, but players modelki many may seem miserable (but the field and the stands are made great). Prospect review – isometric. Verdict – it is quite difficult to make it: probably in my series at the moment is the best the detail and depth of gameplay the game, but certainly not in your sub-genre, so it is recommended primarily to fans of it, wishing to learn as much as possible of such things.

Want to play Premier Manager 3 online now, play it on your browser here.