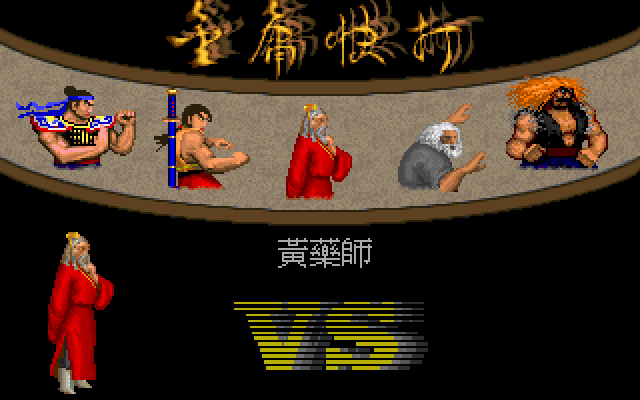 A Fighting game, Jinyong Kuaida was released in 1994 by the famous developed Soft-World International. It is a DOS game and is perfect for all video game lovers.

After the success of Sango Fighter from the rest of the Taiwanese Panda Entertainment game developers urgently needed something to "cover". And so, in 1994, a reputable developer and publisher of Soft-World released their fighting game, dedicated to ancient Chinese culture and literary genre UNL. As in the case of Sango Fighter, the basis of the new product were taken really existing literary source...

Known (but not us), a Chinese writer from Hong Kong, JI Lanjun (查良鏞) alias Jinyun (金庸), during his long creative life wrote quite a lot of novels on historical and adventure theme. If Western culture is to take a sample of the dignity and honor of the notorious novels by Alexandre Dumas on the theme of the Musketeers and France of the XVIII century, the Chinese culture is quite decent analogue to how the genre UNL (武俠). Characteristics of this genre (especially in movies) is a slight exaggeration of physical features nearly all the characters (from the Emperor down to the last tramp). That is why the use of cinematic hyperbole proved to be very enticing for computer games made in the genre of fighting games. "Slight" exaggeration of the power and abilities of the fighters specifically described in the game are just for decoration, of course, their super attacks. By itself, the format is super-attack came even earlier, before the release of Jinyong Kuaida, in other games. The use of wuxia-hyperbola to the abilities of the characters really creates exceptionally bright and unique individuality to each of the participants in virtual fights.

The characters in this game only 14, but whatever. In revealing beautifully animated Intro sequence you can see the techniques and techniques is absolutely all 14 fighters and even a short text about the characteristics of each of them, which shows: what style, who the teacher is and what school of martial arts has brought such a unique person, as well as other information. Which of the novels was the basis of the game remained unclear; it is possible that this team is the mix of characters from different literary works of Jinyun. However, I'm sure I've seen a few characters from the infamous Condor trilogy, games RPG-which– The Heaven Sword and Dragon Saber (倚天屠龍記) - were recently posted on our website. Here are some of the names of the great masters of martial arts in the game:the Golden-mane lion King (金毛獅王), the Undefeated of the East (東方不敗), the Woman Little Dragon (小龍女) – it somehow within their super-abilities, commands some swarm of insects. And there is Ouyang Feng (歐陽鋒) – funny guy, which can sometimes turn into a frog with bulging eyes; there is a grown up main character of the game The Heaven Sword and Dragon Saber, whose name is Zhang Uji (張無忌). Now it seems even headed the school of style Min (明教), according to given textual feature.

The format of the fight is simple and uncomplicated. For a limited round time (default is about 1.5 minutes) you need to "cut down" the enemy. Total rounds is three, but their number can easily be changed at the request of the player in the settings. After the victory of a fighter he credited a bonus in the form of points, which in total included the early end of the battle, the rest of the character's health and the premium bonus (sometimes). Of course, the best fighter will take a leading place in the records table. In the match of the first indicator shows the level of life health of your fighter, the second indicator shows the slow accumulation of Qi to implement another super attack. Of movements is jumping and squats, kick – a completely classic set of upper, middle and lower attacks. Depending on the choice of the pair of fighters will change as the scenic backdrops of the scene of the fight. There's another VoiceOver (for example: FIGHT = Kai Shi in standard Chinese), and many of the characters too, something they constantly babbling in Chinese.

Knowledge of Asian language is not critical in order to try this fighting game. Everything is clear without any text comments. The only thing that you will not be able to read a brief description of the fighter, but it is not important in the game. In order to experimentally learn the abilities of each of the characters, you are given unlimited playing time, and I would recommend to spend it with maximum efficiency and pleasure. This game will be a pleasant gift for fans of martial arts and Chinese culture, and simply for lovers of computer games in the genre of "fighting game".

Relive your old memories by playing Jinyong Kuaida free and online on your browser now.