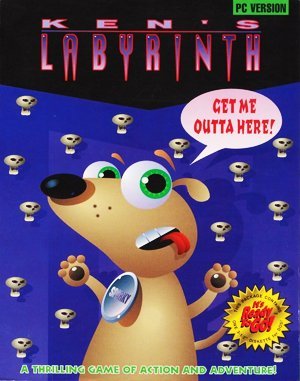 Click here to play Ken’s Labyrinth online
5.0 /5
When Sparky the dog is kidnapped by aliens, his owner chases after them to rescue his dog.

Ken’s Labyrinth is a first-person 3D shooter. The protagonist has to escape from an underground labyrinth populated by monsters while trying to rescue his dog Sparky. The game plays similarly to Wolfenstein 3D and involves the protagonist traversing colorful maze-like areas, shooting monsters on the way with exotic weapons such as a bubble-gum gun. Play Ken’s Labyrinth online!

The game’s stand-out feature are interactive elements: there are vending and slot machines in the stages which the player can interact with, as well as breakable walls.