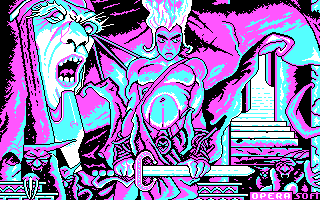 Dear Spanish hand-drawn arcade game. In the beginning we waiting for a pretty long Intro, with the slow (on the screen for a long time, nothing changes), so you might think that the game has already started; no need to be frightened.

From the video you can understand the plot plot: the children (or hobbits?) happily living in the lap of nature and having fun, but suddenly an evil wizard appears and steals them all and leaves. Shepherd Served during his arrival for sheep, and therefore escaped the kidnapping; now he must save his friends, and he goes to monsters inhabited land.

Moving forward, killing monsters from a distance and collect rare power – UPS- that's the point of this game, which is no different from a hundred others. Note that its wonderful atmosphere: here is a really unusual monsters and very beautiful landscapes. Despite the formally dark story, it looks very nice. Among monsters there are, for example, walking, flying and even living in underground burrows demons, able to suddenly get out of the ground and attack from a distance, huge worms that after the murder of a burn (after his murder to move forward immediately is not necessary – otherwise you get a burn), and others. The health of the hero more than decent.

Graphics, as has been indirectly observed in the game astounding: the brightest, colourful palette, a clear portrayal of the characters, the backgrounds in the best traditions of the classics, so to speak. However, compared to many other Spanish arcades this – perhaps the simplest of them (which means "platformer of above average difficulty"), but, nevertheless, to see this miracle (as for rarity and beauty) worth every connoisseur of the genre.

Management, as in any old Spanish game: O and P – move, space – shooting, Q – jump, if you press A, the character just raises his hand.