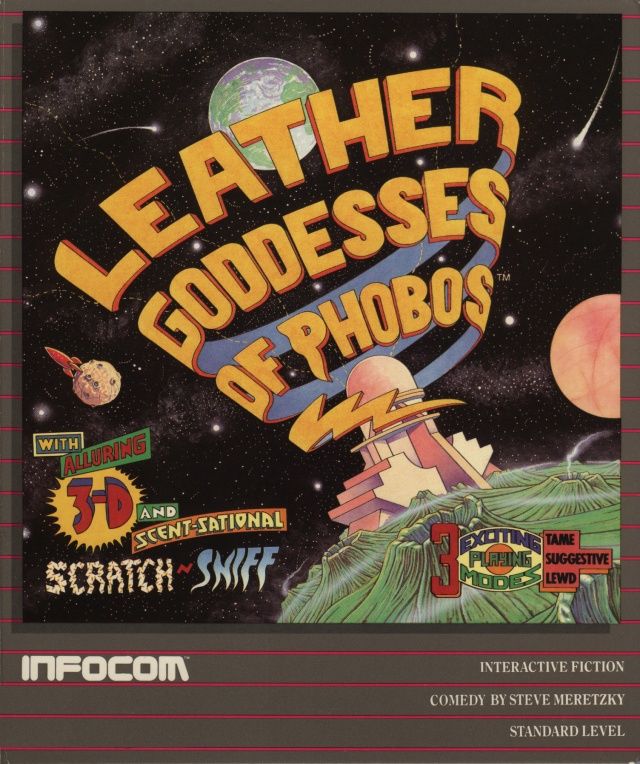 Developed by Activision Publishing, Inc. in 1986, Leather Goddesses of Phobos is a perfect Adventure game which ruled the arcade for several years. You can now play it online here.

Another text adventure from Steve Meretsky, which this time decided to tell a humorous story, a spoof of American pulp magazines and comics of the first half of the twentieth century. The yard is 1936 and the Leather Goddesses from Phobos want to enslave the Earth and turn it into your entertainment area. In order to better understand earthlings, they kidnap a few typical representatives, one of whom is the protagonist. So now he (or she) will have to show the wonders of cunning, courage and just terrible luck to get out of this situation and save the Earth.

At the beginning of the game demonstrates some originality. We can choose the gender of your character. There is a big difference, but it depends on who will be his (her) companion (companion), as well as some of the descriptions and puzzles. At any point in the game, you can choose the level of explicitness of the descriptions of the three possible - however, even "obscene" level we should not expect anything, in addition to easy textual erotica. The humor in the game is quite specific, requiring knowledge about how many in old comics and magazines pathos and "piano in the bushes". In the instructions shows a slightly exaggerated example of such a comic, at the same time contains a few important tips.

The rest of the game is typical but high-quality text adventure game. The parser is smart enough knows a decent number of teams and knows how to combine them into longer chains. The text is well written and funny. The game is not the easiest, mainly due to confusing world consisting of locations of connected devices of teleportation. There is a very complicated maze in which in addition to the normal puzzles you need to regularly perform certain actions, scaring away hungry local fauna. Among the puzzles highlighted the need to manage cryptographic knowledge, reading the message that had been encrypted using a simple cipher shift. And have to do it to the player, not the game character.

I can recommend this quest to all fans of text representatives of this genre, and especially for those who like the series of quests Spellcasting, the predecessor of which he serves.

Enjoy playing Leather Goddesses of Phobos online, it can be played on your browser and is free.