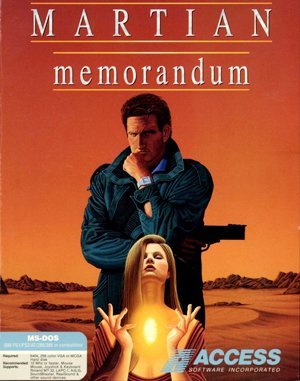 Click here to play Martian Memorandum online
5.0 /5
Sequel to Mean Streets, and the second game in the Tex Murphy franchise.

He gets a call from Marshall Alexander, a business tycoon who owns most of the industry on Mars. It seems his daughter Alexis has run away from home, and taken “something else” with her. Marshall won’t say what that something else is, but he is willing to pay handsomely to get it (and his daughter) back.

Unlike its predecessor, the game contains only adventure gameplay, removing flight simulation and action sequences. Basic gameplay mechanics are very similar to those of the first game, placing interrogation and choices above object-based puzzles. Verb commands are used to interact with the environment, while interrogating suspects usually involves selecting conversation options. Making a wrong choice may sometimes prematurely end the game or render it unwinnable.