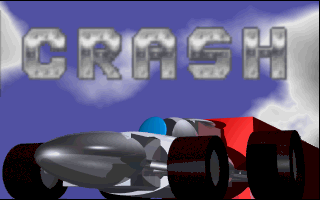 Crash from 1996 is a Top-down perspective game released by Digital Nightmares. If you want to play this game, click here.

Released in 1982 on the big screens of the movie "Tron" marked the beginning of a whole series of games dedicated races on light motorcycles, the episode which was in the movie. And since the developers of different poshiba not once, not twice appealed to then raised the subject in their works. An example of this trend is the Crash from Digital Nightmares.

For those who have never encountered this subgenre or have forgotten, a brief digression. There is a relatively large space, at different points, which appear to the opponents (usually only two). Having just departed from the scene, the motorcycles start to leave a stable plume, collision with which is deadly as a border zone. Task is to lure the enemy into a trap and remain the sole survivor. This is what is proposed to do in Crash. Only as additions to this gameplay is the ability to produce a limited number of shots that will clear the road ahead.

In the end, in front of us passing a clone that does not have as notable features, and significant deficiencies, characterized by a satisfactory graphic component free (Windows version was distributed via the shareware model) origin. And is therefore recommended mainly to all interested in such specifics.

Want to play Crash online now, play it on your browser here.