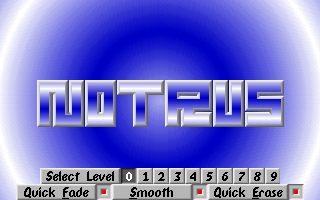 Notrus from 1992 is a Side view perspective game released by John Stephens, Subha Ghoshal. If you want to play this game, click here.

Version of the game "Tetris" created by John Stevens and distributed under the shareware model.

At first glance we have the full likeness of the original (with the exact same lack of the ultimate goal, except for her desire to score the most points), except that the units (standard for this game form) multi-colored (which plays no role) and externally give the impression of a solid, not composed of elements of the figure (although in the case of making a continuous series of parts are destroyed, of course, only the latter). The only notable point is the headline "not y" (this is a specific local term, and not a hint of Russophobia!): so is a situation where the "glass" is freed immediately from the four series. Such action gives not only points, but also opens the counting of the number actually "not s"; if one such success immediately follows a similar (that is, first consumed four lines at a time, and then it immediately when down the next block, was repeated), then that player earns a "double not" ("triple" and large, alas, is not provided). Also note that the higher relative to the lower border of the field was destroyed the number, the greater the number of points charged for it.

Before the start you can choose one of nine levels (probably of different complexity), and configure the speed and smoothness of the falling shapes, and the rapidity of the destruction of the collected rows (by default the latter occurs slowly and somewhat unusual line reminiscent of "gates" sliding towards the side edges of the playing field and vanishing outside it). Check program according to the Readme allows you to get more animated effects and at the same time to get rid of the occasional reminders that it's necessary. There are several options for backgrounds (often beautiful and unusual) screen, where the action unfolds, which differ depending on the selected level. Overall - pleasant enough, but not able to do anything to impress a version of "Tetris".

Not sure how to pass your time, why not play our classic videogame Notrus online? And the best part, it is for free!