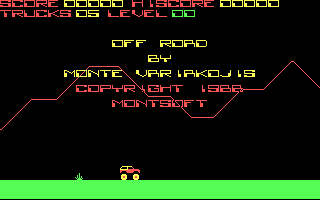 Montsoft released a DOS game named Off Road in the year 1988. If you are interested in playing this Arcade online, then click here.

Combat arcade-style game Moon Patrol. The plot really is not, but the action apparently takes place in alien, or is a post – apocalyptic world. The game side, we manage a jeep (which still rides on the road, despite the name of the game).

Jeep can increase and decrease the speed and to jump over obstacles and shoot endless enemies missiles; you can also find and collect a limited number of bombs, which you can then throw in air enemies. Enemies, by the way, is the main "charm" of the game, especially considering the fact that it consists of eight fairly long levels.

In each level your enemies. At first it's just the rocks, in which it is impossible to crash, cacti that need to jump over, and the bikers who attack you, but that is weak and go slowly (so they are easy to hit with missiles). On the second level, too, there are rocks, and motorcyclists, but added more red cars that can drive faster than you, so the tactics of dealing with them may include including the slowdown before jumping through them.

Later you have to deal with the fighters attacking you, and then the green bombers, which cover the earth just a hail of bombs (but you can bomb them from the ground if you find the bombs), helicopters and landmines. But, of course, the game would not be remarkable, if, among other things, there was no live flying yellow squares (!) and giant heads of squirrels (!!!), as well as flying triangles and diamond head as the main boss.

Graphics of the game is quite conventional and seems to be intentionally made in the style of Moon Patrol, despite the difference in age, games: for example, there are virtually no backgrounds, and drawing objects on the screen (except our jeep and some enemies) is rather sketchy. But noted above in no way prevents to obtain from this dear game, just a sea of pleasure to play because it is not as easy as it might seem at first glance. All lovers of really old arcade combat – highly recommended.