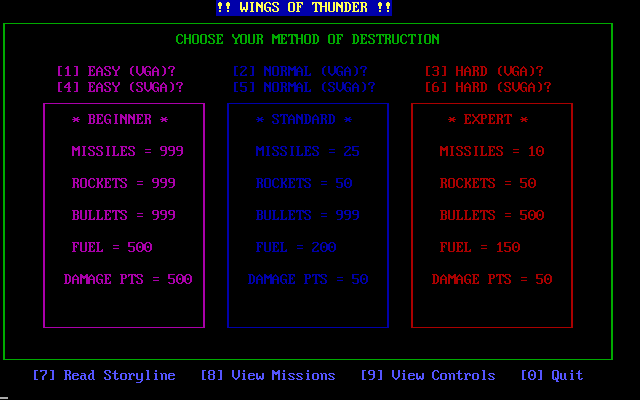 Wings of Thunder is a Action game released by Mike Layer in 1994. It is an interesting DOS game and a must play for all old videogame lovers.

Quite an interesting game at the junction of the flying and simplified simulator. The plot is obscure, although there are: you in the role of a pilot, apparently a regular plane you need to destroy alien bases 22 of androidov based them on the Ground.

The game was made by one person and distributed free of charge, however, they do not look like a "hack". The first thing that surprises - management approach: of course, everything is a little bit easier than in these simulations, but do not think that to send your means of transportation you can use the cursor arrows, as in most of music. The game begins at a military airfield, and if you have not already read the description of control keys - is unlikely to be able to fly.

In search of enemy targets, you will help special sensors. Gameplay - the destruction of both opponents and terrestrial objects, and the more the better. Periodically on earth, you will encounter the airfields where you want to sit down to replenish ammo (but that fuel is, apparently, here ends) and repair (for a margin of safety of the plane is also infinite). The problem is that the fit here is also not arcade - for its implementation you need to perform a number of actions, otherwise you risk to crash.

Graphics are relatively good even, and only for this game - even more so: sometimes there is even a daring hint of three-dimensionality, albeit scary-looking now. Overall - unexpected (in terms of its detection) and objectively challenging game that could appeal even to fans of serious aviasimov.