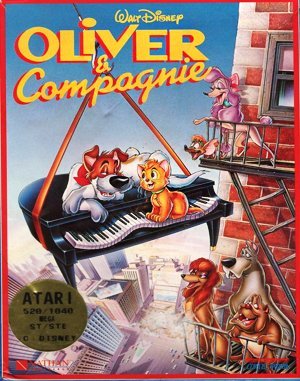 Click here to play Oliver & Company online
5.0 /5
A fairly mediocre jump'n run based on Disney's movie of the same name, which is in turn based on Charles Dickens' classic Oliver Twist.

Plot is same as in the movie. Oliver is a homeless cat that teams up with a gang of dogs and their poor but good owner in New York. You control Oliver through mouse and keyboard and you move around in various places such as the dog gang’s home, New York streets and Jenny’s mansion. You must score 1000 points to get to next levels. You score points by collecting hot dogs on the street and by catching flying dog biscuits.

In scenes reminiscent of Home Alone, you must escape and deal with these bad guys once and for all. Gameplay is typical platformer– jump, run, and avoid obstacles. While the graphics and animations are quite good, the levels are much inferior to the clever designs of Disney’s platform games (e.g. The Lion King and Aladdin). There is very little variety to break the monotone, so the game quickly becomes repetitive.

You can play Oliver & Company online here, in web browser for free!