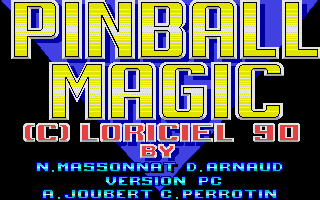 A Action game, Pinball Magic was released in 1990 by the famous developed Loriciels. It is a DOS game and is perfect for all video game lovers.

There are twelve tables, each of which, unfortunately, is very similar to the others (though the authors of the game claim that they are almost exactly in exactly repeat the first pinball machines of 50 years). On each of the tables there are a number of control points (on each of the tables are different), which need to touch the ball, that appeared to move to the next table. You can even play together on one computer; the balls the player (or players) on each screen – five.

Of the interesting objects on the tables – blocks-bricks that need to be broken, as in arkanoid, forward (they often close the access to thereby control points), "black holes", which give more "life" (i.e. balls), and even "one-armed bandits" once in which the ball can earn a lot of points. On some tables the player can expect further complications of the gameplay.

The graphics in Pinzolo traditionally not measured, but here she is objectively very pretty, although neither large nor varied in number of objects on their desks-levels can not be called. To recommend the game to all fans of pinball entertainment, because it is in any case not bad, just the most that neither is ordinary pinball.

Now, play Pinball Magic online for free on your browser and make your boring weekend fun and full of entertainment.