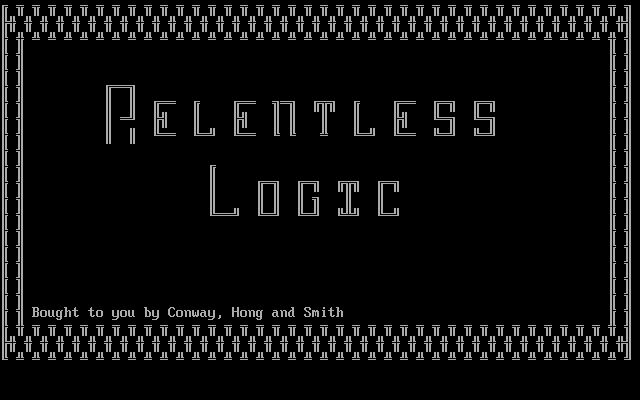 Not so easy to believe, but popularly known as “Minesweeper” is a great-grandfather. And now we get to meet him. Meet - the Relentless Logic: it is likely that the very first IBM PC game dedicated to the work of the people, which can be just one mistake.

The briefing tells the player that we are ordinary United States marine corps and have to deliver to the headquarters of urgent telegram, which, of course, depends on the fate of the entire state. For the successful implementation of the post mission, it is necessary to overcome the minefield, which the fighter equip a mine detector, which shows the number of mines in neighboring cells. Their number is determined before the start of the race in the range from 15 to 40, after which they are randomly placed on the field size 9х15 cells, and we begin the difficult road from upper left to lower right, driving a fearless warrior with the numeric keypad. And as an incentive for repetition is the timer, which indicators are recorded in the book of records in case of success.

Well, the simplicity and neat ASCII-appearance of the venerable ancestor “Minesweeper” forced to recommend to the Relentless Logic to meet you everyone, he is open to dialogue.