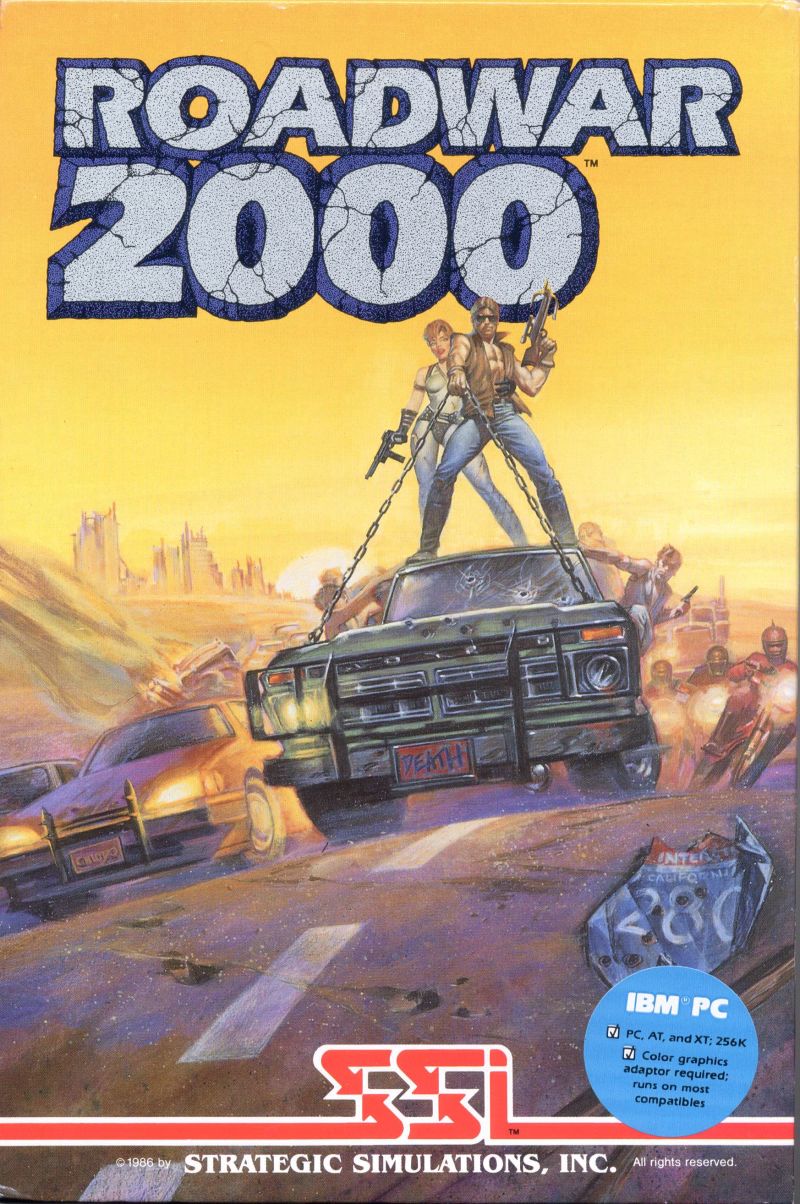 Nothing could stand the avalanche
Tell me, do you fear the onset of the new Millennium? That's it. To us it is far, therefore, this fact is of little interest to us. But the authors of the magnificent Roadwar 2000 Millenium was clearly not pleased. How else to explain that their version of the century implies the occurrence of global epidemics due to the infection of the American population, the bacterium that brought illegals suicidal fanatics satanic sect, and which in the synthesis with the radioactive fallout (nuclear war, of course) causes uncontrolled aggression in residents of evacuated cities! Worse, in the paralyzed States began running up the conquerors, wishing to profit by the wealth of the country, which began bombing major cities. Moreover, some of the bombs jammed (!), and last remained to lie down in parks, schools and other aqueducts of American cities, spreading the mutation among the already hostile population. Is that all? Nooo! In connection with the snowballing procession of mother of anarchy, every one that hang from the army and can hold the gun without hesitation joins one of the hundreds of road gangs (we have, by the way, for the leader of one of these companies), entirely consisting of natural born looters and thugs, robbed of childhood more than a dozen grandmothers.

On this wild imagination of guys from S. S. I seem to subside, as the plot of the last representatives of the government of the long-suffering continent sent eight scientists to gather information about the composition and effects of bacteria on humans, try to take a sample, and return home safely. The only drawback of such a plan can only be adjusted for the speed of propagation of infection. After some few months, the face of the capital of capitalism has changed so much that several conspired the luminaries of science to get to the bunker of political leaders is not possible, so urgently agents of the state handed a hefty envelope filled with the Roosevelts and Franklin unshaven leader of one of the numerous road gangs, with the words "Find them and bring to us."

Highway Star
The search, however, is complicated by the fact that scientists just are unable to notify that most of them hired a gang of killers-merry, and the fact that meeting with them can end quite badly. But... Oh what the hell search?! You really were in the library? Or was up all night with a girlfriend classes?! We're men, dammit! We are careless thugs - free like an eagle and cool, like jaguars! America is ours!!! Well, scientists... scientists will have to wait! No matter what us is sixteen people, do not care what car one, we have our leader! He'll think of something...

If wishes were ponies...
Hmm... the firewood in the harsh reality called "New Game" does not inspire much optimism. Infected the continent, the paranoid residents of small towns, mutants, cannibals, competitors is not hihonki, we urgently need to find a stronger car, eating more, fuel cleaner, and the team must be replenished. Okay, that's enough to boot, we drive to the nearest town (and the towns here are quite real name. Let's say Detroit meets that says "Welcome to Detroit, the world's automotive capital!"), and without causing unnecessary suspicion, we begin innocently wander around in search of something useful. Found whole tires? Well. Fuel found? Take. You've found Sports Car Convertible? Take it Y/N, and in the same spirit. Now quietly begin to approach the car, without turning to hungry villagers with pitchforks and yellow teeth at the ready, and slowly started the engine.

Phew, I think I had to. Yes, these farmers can run really fast, especially when you want to eat... Hey, what's that fog on the horizon? Damn! This is the same gang "Joker Mickey"! Load your guns, men!!!

Where the ends of the graph, starts the imagination. What is really going on beyond the conventional images of cars and roads, something that any film will fail to adequately describe a never - ending whirlwind of dust from the sides of his massive freeways, the roaring of prey by a pack of dozens remade for the murder of the man the mechanical monsters, up to the top loaded reproduced a parody of the civilized man - boom and hoot scum, holding out grimy hands all that could, in principle, to harm! RRR!!!

Autopsy
In fact, Roadwar 2000 is a curious and original strategy with the possibility of pumping their fighters (full automatic, but with each victory in the detailed tactical mode (as opposed to less protracted Road Quick Combat) adds one machine to the maximum number), in a colorful post-apocalyptic setting with many one-pathos-the other groups (only the National Guard are worth), a bunch of random events (You have arrived to the gates of Fort Knox. Wanna check?) and a pleasant opportunity to retake any city any who have the courage to call his master, whether it's local punks, those Satanists or competing road gang. And Yes... it's, like... homework! Over time, in the format of "events" you can get clues about the whereabouts of the scholars, so with the main quest (although for me it is all the same side) with no problems.

PS And at Fort Knox to go shouldn't have.

Relive your old memories by playing Roadwar 2000 free and online on your browser now.