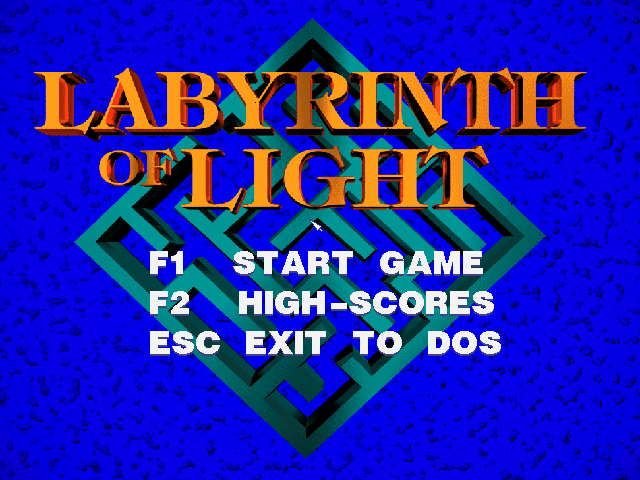 In 1994 Megadream Software released Labyrinth of Light. The game was an instant hit among all and played for years. Play it again online now.

Amazing puzzle in which the player must build streams of light from the laser to the target.

The gameplay is as follows. On the field, consisting of a number of cells are laser, goal (sparking a circle in the red frame), different elements (like purple circles - mirror, through which can pass the laser beam), and all sorts of obstacles, including pieces of glass, and the blue square is the only object on the field, which can be controlled: moving under your control, he can move other elements, with the exception of the laser and the target.

Task - to arrange the elements so that the laser using mirrors or elements with pieces of glass struck his ray purpose. For this, the elements must be arranged in the correct order, and unnecessary to remove from the path of the laser. Move the blue square and permutation parts are subject to strict rules. The square can move only horizontally and vertically but not diagonally; a square is moved to any number of cells up to the element, whereas every element is only one cell; in contact and the square element are reversed on the cells (namely the move - "push" elements are not), even if the square on their own overcame to several cells, the element will still move only one, having exchanged with square seats.

In practice, this leads to great difficulties: for example, square is to the left of the item you want to move one cell to the right - it will have to find a way to be the right of the item that may not be an easy task, as the field is littered with other elements, combinations of which can easily block the path. Theoretically, some levels you can even "screw up" ill-advised actions. Each level has a time limit to four minutes, which further complicates the game. To win, after all elements are placed right on the field, you must click on the laser, right-click, and then he shoots his beam. If the path for beam built incorrectly and the beam hit the field boundary or obstacle, the game is lost. On each level you are given three attempts, if you lose three times in a row the game ends.

The graphics in the puzzles traditionally not estimated, although we must admit that everything shown here is quite clear and very pleasing to the eye oldhamers. The very same game, despite the availability of the little known and has the full right to be called "the found artifact." All fans of smart and really challenging and interesting puzzles - the strong recommendations.

Relive your old memories by playing Labyrinth of Light free and online on your browser now.