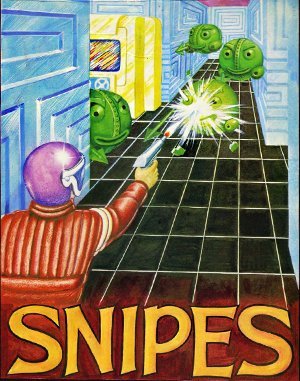 Click here to play Snipes online
5.0 /5
The objective of the game is to control your creature by moving it around a maze to destroy snipes and their hives, and/or destroy other networked players.

Snipes (diminutive for Snipers) is a text-mode networked computer arcade game that was created in 1988 by SuperSet Software. Snipes is officially credited as being the original inspiration for NetWars. It was one of the earliest text mode multi player games, running on Novell Netware systems. Play Snipes online!

Snipes is an arcade style action game. You are in a large maze along with a number of generators. The generators create the enemy Snipes, and to win the game you need to shoot all of the generators and all of the Snipes they create. The game is played using two sets of four keys, one set to move and one to fire; this allows you to both move and fire in eight different directions, and you aren’t limited to firing in the same direction you are facing (similar to the controls in games such as Robotron: 2084). The Snipes are armed as well, and will be firing back at you! If you lose all of your lives, the game ends and the Snipes win. There are numerous skill levels available; in the higher levels the snipes are more numerous, more aggressive, and the maze walls become deadly to touch.

The player must first specify the number of snipes, hives and difficulty before they play. Each game is different because the computer generates a random new maze.

The creature is moved using the keyboard arrow keys and shoots in different directions with the A, S, D and W keys. By combining keys, diagonal movement and shooting can be achieved. Pressing the spacebar can provide extra velocity to run away from difficult situations from the snipes.

Several level options are available. First, a letter is chosen, which controls the environment settings: what bad guys are available, their accuracy at attacking, whether or not the player’s diagonal shots bounce off walls, whether running into a wall will simply block or kill you, and whether the hives have a partial resistance to snipes’ shots. The next choice is a number, which controls the maximum number of snipes that may exist, how many hives are initially created within the maze, and how many lives the player is given.

You can play Snipes online here, in web browser for free!