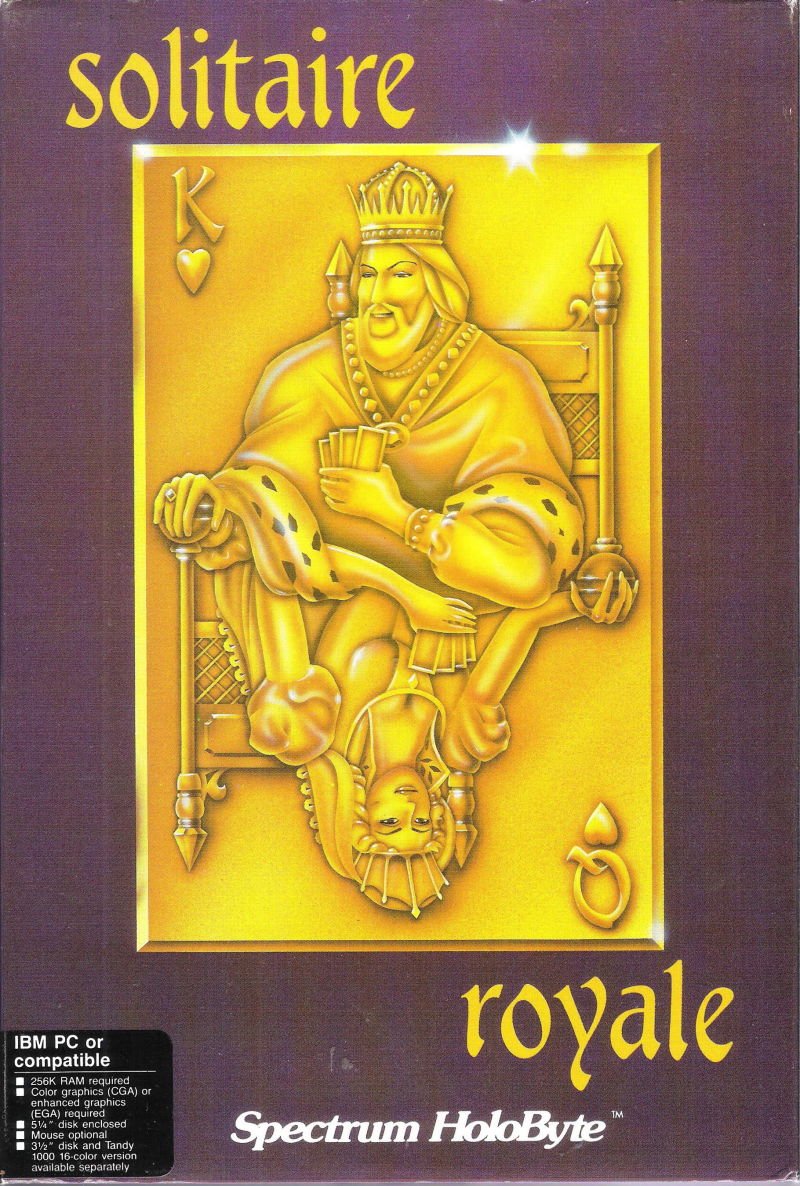 Solitaire Royale, a DOS game was released by the very talented group Software Resources International in 1987. Little did they know that they will end up making history. Play this game again here.

The game, called "killing time", was always. It is hardly possible to determine when the first solitaire game, and their diversity and number indicates continued interest in such games. It is not surprising that even before the dominance of "Klondike" and "Spider", which with a light hand of Microsoft became almost the only game which is played by the average user of the computer there was a computer version of these card games. Not the last of them is a collection of Solitaire Royale from the company Spectrum Holobyte - it is even considered that this was the first computer solitaire. The first version appeared in 1985, and the version 1.5 in 1987. I'll describe this latest version, as it is the most complete and in my childhood was the same.

First, it is worth to give credit to the programmer of the game: it still works fine under Windows XP. When you start the game, we are offered a choice of several options "shirts" for cards - you can feel the attention to the player by the developers, at that time, even about such little things sometimes didn't care. Indeed, the navigation and game control convenient and user-friendly. Read the rules, you can easily at any time, this does not necessary to climb somewhere deep in the menu or in the user manual. At any time you can return to the last move (but only the last - all as actually), replay the whole batch, or even peeping the cards in the deck.

All available in a choice of 8 solitaire, two additional versions of the game ("tour of Auntie Anne's", where you have to play all the game and game account), as well as three children's games. About the children's games are worth mentioning very briefly: all three are variations of search pairs. Interesting last game of the history of its origin - once it read "likes - dislikes" (if solitaire was going to like, or not), but then the game moved into the category of child, meaning simply the fulfillment of any desire. Indeed, the probability is quite high, probably about 1/2 and the game is not based solely on the case, but still allows the player to affect the outcome.

But go to a major games - they are much more interesting. To paint all of the rules, perhaps, not worth it. Focus only briefly on the main aspects. The first game is "Pyramid". Cards are stacked in a pyramid, initially available only the bottom card and the deck. The goal is to remove all cards by connecting pairs that form 13 in total (ACE = 1, Jack = 11, Queen = 12, king = 13, removed without a pair). From "Bito" you can take only one last card, you can also use the available cards - those located at the bottom, as well as those that do not hold other cards (i.e. you can remove the two cards, which are located one under another, provided that under the top card no more other cards). The game is very simple, but fascinating. The probability is small, but quite feasible, even taking into account that you need to remove cards from "Bito" too.

The second game is "Golf". Cards are arranged in 5 rows of 7 cards. Only the lower in each column are available. From the deck get a queue card, then the player needs to collect a "chain" of cards, which differ in value by 1 from the current. That is, for example, 9-10-j-10-In-10-9-8-7-8 etc., except for the ACE, which comes after 2, and the king who goes after the ladies and who always ends the chain. This solitaire game for all its simplicity, gives many possibilities of game play, although, of course, as in all other games, mainly based on the principle of "the card will fall". To put together - very difficult: you need to evaluate which cards should be released faster, and what should wait.

"Klondike" - a well-known solitaire, there to dwell it makes no sense. But the next solitaire is very interesting - it's called "Canfield". In fact, this is an advanced modification of the "Scarves" and that adds another deck, from which you can take only one card and is available only 4 fields for shifting, the top card there can be put only from this "single" pack. The upper deck at any time to sort out and use, but only every third card. The goal in Klondike is to build all 4 suits in ascending order. Make it extremely difficult, but if you choose the right tactics maybe.

"Angles" - a solitaire game at first seems very complicated, but if you look, very interesting and, most importantly, more than others requires effort of the player, and not just luck. You need to collect all 4 suits in the corners of the square in ascending order, starting from a given (deck cycle, that is, the king is followed by ACE, then 2). The other fields in the square, you can add cards from the deck, but to each other can be placed only in descending order. The game is very important attention and memory, so as to look at the cards that lie under the upper, without removing the upper is impossible. From "Bito" you can also take only the top card. However, with the correct tactics to collect solitaire you can, and it turns out quite often.

"Calculate" - "arithmetic" solitaire. If you have by counting the multiples of 2, 3 and 4, taking the remainder after division by 13, and even transfer them in "card" view my head is spinning, I recommend to write the right sequence of cards on a piece of paper and watch her. Need to collect all 4 of the sequence at the top. To "save" the cards are given 4 fields, but to take from them only the lower card. This game is also very exciting and also provides a large space for player, so a win is possible almost in any case cards.

"Three stirring and pulling one card" - a complicated name, but which completely describes the rules of the game. Her cards are arranged by groups of 3, and you can only use the top. The goal is to collect all suits. Maps can shift, but only in descending order and only if they are of the same suit, so gather without conditions is impossible. Therefore, it can be 2 times to mix all the cards and put them in the other three, and once you can pull the map from under the other. Despite this and the fact that the game can use different tactics, the result is still mainly depends on the will of the case.

Renault - most likely, the game is taken from real gambling houses of the past. This is evidenced by the figure in dollars that you bet on the game and your score - how much you've won. Initial rate - the number of cards is 52$. Each card you have collected (as usual - each suit in ascending order from ACE), gives you 5$; thus you can potentially win is$ 260. The game rules are almost the same as the "Canfield", but the upper deck can only be viewed once. Therefore, in reality, usually it's not even talks about how to use the entire lower deck (and without this you cannot use the kings from the top). Moreover, even the return of their 52$ it turns out only 1 of the 5 cases. After the statistics from 50 games (that is, spending 2600 virtual dollars) I amount lost 810 dollars, that is approximately $ 16 per game. But despite not too high winning percentage, it's hard to break away, - here - and get their money back... Well after all that all this fun.

Summing up, we can say that the game, in addition to its historical interest, deserves attention simply because it's fun to play even today. Don't be surprised if I sat down to play it "for 5 minutes" surprised to find that late at night.

Relive your old memories by playing Solitaire Royale free and online on your browser now.