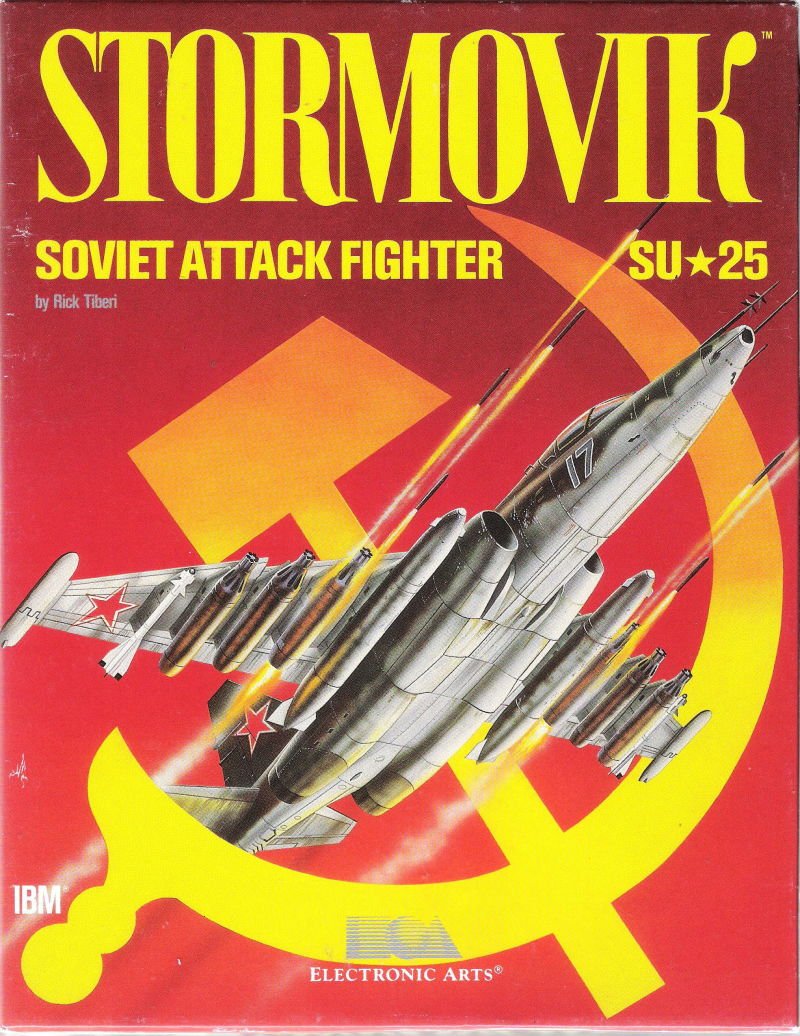 Stormovik: Su-25 Soviet Attack Fighter from 1990 is a 1st-person perspective game released by Electronic Arts, Inc.. If you want to play this game, click here.

Truly elegant and rich for your time simulator. Here are intertwined the best that you could then squeeze on the PC platform in the early 1990s. You are waiting for a detailed simulation, a bright polygonal 3D graphics, rich's plot is based on dangerous combat missions... lots and lots of "cranberry" – the so-called popular stereotypical cliches in the West about life in the Soviet Union and the Soviet period in the history of our country...

The plot is based on alternative pseudo-events, when the USSR collapsed, but continued to exist. In 1991, the process of peaceful reunification of the GDR and the FRG decided to stop reactionary-minded "undemocratic" forces, and appeared mutually from both the USSR and the countries of NATO. You are the pilot of attack aircraft su-25, in certain professional circles unofficially referred to as "the rook" (on classification of NATO "Frogfoot"). The homeland is entrusted to you a responsible task: participation in military operations to defeat the various illegal terrorist groups operating in Eastern Germany.

Just harvested three campaigns with different time steps. Each one has more than a dozen missions. The range of combat tasks in the missions are very diverse: from the usual destruction of the armored column to escort of air force 1 with the President of the Union or the elimination of high-ranking traitor and defector. Sometimes performing seemingly ordinary tasks can contain sudden and unexpected plot twist.

Management of not quite convenient. First, takeoff must press "T", otherwise it will remain on the runway. Second, it is realized not all degrees of freedom: there is no control for yaw. Changes in pitch or roll depend on the degree of deviation of the marker on the HUD from the neutral position. With the return to the neutral position changing the angles of roll and pitch instantly terminated. The speed of rotation in azimuth is strictly proportional to the magnitude of the roll. Perhaps there are the beginnings of implementation of the stall into a spin at low values of horizontal flight speed. Job modes of the engine – numeric keys from 1 to 5. When you press certain keys in the cab changing the appearance of a number of appropriate switches. The cockpit is made with a claim to authenticity. No, the resolution 320х200 technically it is hardly possible to achieve any level of credibility, however, the screen is easy to discern and act "Birch" and the status indicator of mechanization and suspension points, and many other elements typical Soviet design of the cockpits of combat aircraft. There is an opportunity to look around, but the front panel for some reason always be stuck in front of your nose. Before departure there is a choice from a wide range of weapons mounted on any of the suspension points, which the su-25 there are a dozen. During the flight on your winged car you can admire from the outside, choosing one of the convenient appearances (function keys).

If the simulation of the aerodynamics of flight, frankly, the authors of the game did not work, then the rest... the behavior of the model aircraft in the battle is striking in its detail. Implemented gradual failures of the onboard systems, the loss of some ammunition on the suspension points from the dense anti-aircraft fire, provided the visual effects overload, simulated elements of wing mechanization and means of active jamming. Despite the fact that the plane "attack" implies that there is armor around the cockpit, you can even in these circumstances, to receive a deadly wound (!). The degree of damage to your health is indicated by the bullet holes on the windshield glass and blood stains.

Now the most interesting – on "the cranberry". No, "Matroska", "vodka", "balalaika" – a primitivism here, fortunately, no. But otherwise... the Whole political atmosphere and even the summary of weather conditions you will always learn on the first page of the newspaper "Pravda" with a recognizable profile of Lenin in the top left corner. And for each run of the game is the user must always enter a translation of some Russian words (written with accents, by the way), which in the beginning after the app starts there is always a"RUSSIAN – ENGLISH SLOVAR" (spelling just in case, saved). And translation of words to English, of course, could only be found in the manual that came with the game. Agree, quite original method of copy protection, and "our brother", which for some strange reason never been around such a manual, it was also a great opportunity to learn a foreign language! Your promotion will be accompanied by presentation of the relevant Soviet awards. With increasing ranks will grow and the complexity of passing the mission. If you go through all the campaign, in honor of your victory will be shown a picture of an extraordinary solemn parade on red square. And in the event of your death will be shown a memorial in granite, which, no doubt, will remain forever letters from your nickname. And as it became known from reliable sources on the Internet, the game depicts a real-life memorial of Glory located in the Sunny city of Novosibirsk. Well, in case you refuse a combat mission you will naturally be the least Sunny and heavily snow-covered field with barbed wire around the perimeter and vigilant sentries...

Graphics... well, what you would like in 1990? Models of technology – with a minimum number of polygons. On the surface of the earth the display of the shadow from your machine. There are different versions of color graphics from CGA to VGA. The menu is made with good design and eye-pleasing font. Sound implemented PC speaker. Slightly spoils the impression of strange system zoom, which by default is a 2-fold increase. And already at not very high altitude any object on earth ceases to be visible. Indication of values of speed and altitude made about the miracle in their home for us km/h and metres respectively.

The game – higher score. Yes, the Soviet machine had only just started appearing in games. A year later came the MiG-29 Fulcrum (the publisher Domark Software Ltd.), and then, in 1996, - HIND: The Russian Combat Helicopter Simulation, which also had generous portions of delicious "cranberry". However Stormovik: SU-25 Soviet Attack Fighter may still be considered a full-fledged first-born in this lineup of Western games on Soviet military equipment. And then, after 1990, about the su-25 legislators computer entertainment long forgotten. After all, a small, unprepossessing and a bit clumsy prude-the attack will always lose on the outside effectively any "purebred" multi-purpose fighter of ultra-modern beauties like the su-27, F-22 or F-117. And only then about our old "rook" again remembered domestic developers from Eagle Dynamics, and he appeared in a series of LockOn (2003). But that's another story...

Alternative description - Virgil:
Su-25, as the name implies, is dedicated to the aviation theme and simulator is the first simulator of the Russian (then Soviet) aircraft. The action takes place in 1991 on the territory of present-day Germany (but then the FRG and the GDR), and you have to fight with terrorist groups (existing, under the auspices of NATO) seeking to join the Republic in one piece. Mission quite diverse, ranging from aerial photography of enemy objects to destroy various enemy groups. The ability to fly other aircraft, the attack can be equipped using your own judgement, that is to decide what is important to you - additional fuel tank or a set of missiles "air-air". What really spoils the game - so it's awkward controls and the lack of any documentation on this issue.

Do you want to relive your memories and play Stormovik: Su-25 Soviet Attack Fighter online in your browser? Play it now for free.