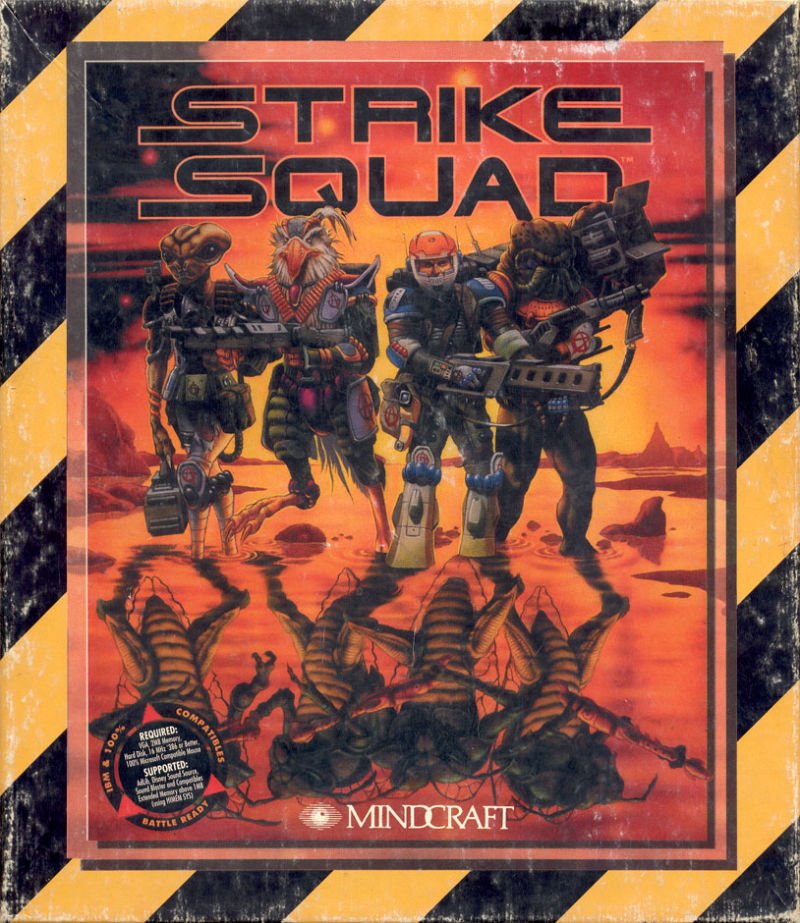 Developed by Mindcraft Software, Inc. in 1993, Strike Squad is a perfect Strategy/Tactics game which ruled the arcade for several years. You can now play it online here.

At the same time a turn-based strategy and RTS in a futuristic setting, very similar to the series X-Com.

So distant future. A significant part of the known Universe is ruled by the Consortium. But suddenly from outer Space invades terrible (but highly evolved) race of insectoids K Kistiks (actually name) that begins to capture the planet and devastate them with monstrous cruelty. It seems that they have no specific goals – they just destroy the entire population and resources. In the end the power of the Consortium up to the fact that under their control there was only one inhabited planet, and it's already surrounded by enemies. And that's when they decide to summon you, commander of the mercenaries Strike Squad, that you personally made something that are unable to cope with the whole army, namely, "small" sabotage operations "broke the back" war machine damned ugly creatures.

Your hero was also chosen because his home planet – Bao – was one of the first destroyed by the creatures, his entire family was killed, so he, of course, not against cruelly to take revenge on the aliens. Unfortunately, at this point, the story almost ends. "Almost" - because, of course, some justification for the missions there, but it is not very clear: the impression that we are doing some rambling task. It's not very good, of course.

Go to the gameplay. What can I say? It really is VERY similar to X-Com. Very. Not at all, of course, but when it starts the actual game, it looks like this is some new incarnation (albeit not the most successful, perhaps) a great series. However – please note that the Strike Squad had appeared a year BEFORE the first part of X-Com, so it is probably more correct to say that just the whole series of X-Com is the development of the ideas Strike Squad. May safely (especially since, if anyone remembers, before that it was Laser Squad, which (on the PC) and marked the beginning of the subgenre), but still.

The first thing that should be mentioned - we can fight not only step by step, but in the real time. First we need to gain a team. Her "settings" - easy: the skills of Marines just a lot of need between them intelligently allocate some team members (for example, the first Rifleman or medic) is practically mandatory, without them the game can not go. After setting up the actual mission, in the case of successful completion, we get the higher rank and the ability to buy for their guys weapons and various useful things.

View in game mode – exploration and battle to the top. However, there are many other screens: you can admire the flight of our little ship from planet to planet, you can study the tactical map of the planet on which he landed, something that can be read; there is also a separate screen to buy things. The graphics are good, but, in my opinion, very much inferior to even the first X-Com from. It is also worth mentioning the possibility of playing together on one computer (the screen is split in two with a vertical bar). However, for K Kistiks play will not allow (and sorry – if someone would be interested?), this mode is for competition between live players – is given to every squad, and who will kill the creatures in this place on their half (creature, too, is on both halves of the screen) is the winner. But if we compete and can play as "allies" and "enemies."

In General, a good tactical strategy, without claiming to be the masterpiece in the first place will surely appeal to fans of X-Com, though many of them may find its relatively simple plot and boring. But still worth playing.