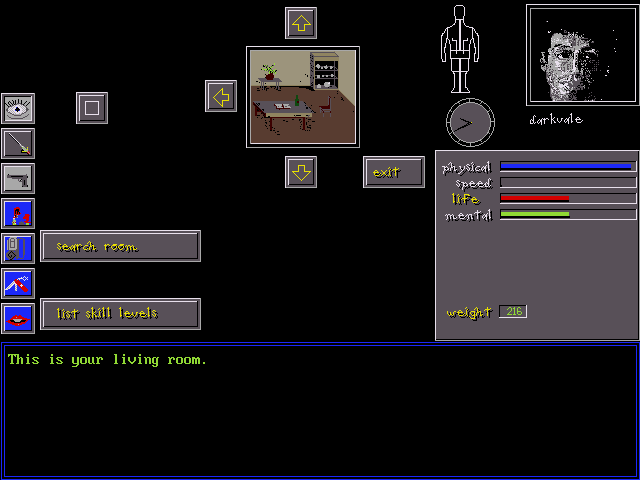 Defender of Boston: The Rock Island Mystery, a DOS game was released by the very talented group Tim Wisseman in 1992. Little did they know that they will end up making history. Play this game again here.

Amazing mixture of RPG and text adventure games. Its action takes place in Boston in 1921: died down First world war, society is still not out of depression (although depression is still present eight years) and is in a kind of spiritual chaos, where there is always a place of dark forces. The protagonist – the usual private detective who is used to doing the usual boring household investigation. But one day he suddenly turn down members of a mysterious organization "Fund Fanusa" to investigate the abduction of a certain Fred black, and Things (called that way) he had: an ancient artifact that can give its owner the power over all mankind... More on the story to say no, it is enough to note two things: first, there is really a lot of mystery and horror, second-game is time limited (and its interface has a clock that is constantly ticking...).

The game begins as a "real" RPG: you need to distribute points among the various skills of the hero to achieve their optimal values. The number of skills and attributes is very large, and among them there are not only the usual strength and agility, but also things like perfect pitch, a knowledge of chemistry and martial arts of the ninja (apparently, our hero is a very talented and versatile person).

Despite the fact that the graphics in the game are few and the interface is similar to that used in the text adventure with graphics, this game is still quite different: to print the commands here do not have, because for all actions, be it moving, fighting, learning anything, NPC dialogue and so on, meet a range of option buttons but, overall, simple management can not be called.

All the movements, incidentally, occur in real time, as well as the fighting, the walking around the city and beyond can walk, but in this case, the character will be very tired (and the limit of his strength is infinite can not be called) and he will need the rest; while the territory to explore is huge, the opportunity to go into the building too, so the game may seem long, but time for research is not so much. It is also important to note that the game has the opportunity to collect various items, and the more the harder hero to walk for long distances. You'll have to fight a lot with someone from the yard dogs to monsters (...), and about the approach of some enemies you can only know by sound.

The list of available actions is large, as the number of skills of the hero, and for some reason the chemistry in the game given a lot of attention very often have to mix different materials to obtain, for example, explosives (in the game there are other cases where something need to combine different items). In addition, there is a seemingly "commonplace" in the form of food: the hero needs to eat regularly, and cook your own food it needs on their own. The choice of the numerical skills in the early game, by the way, should be approached very carefully: what is something you almost never need, and some will depend almost able to beat the game (since the number of points you will need specific skill and the specific skill level in it). Thus, the game can be called almost the "simulator of life of a detective who has to investigate a mystical thing."

The graphics in the game, as has been said, very little, but to see something still succeed (although it will be traced, to put it mildly, not too great). With a heavy interface, it was still possible to reconcile, but "removal" of the hero of the game in case of his death – it is very sad (but save when you exit from the game automatically). Verdict – this is a good adventure game in the spirit of Lovecraftian horror, but to play it, unfortunately, due to its complexity and perfect singularity can only be a few.

Have you ever wondered what kind of video games were played in the good old days? Try playing Defender of Boston: The Rock Island Mystery online now and we are sure you will not stop playing again.