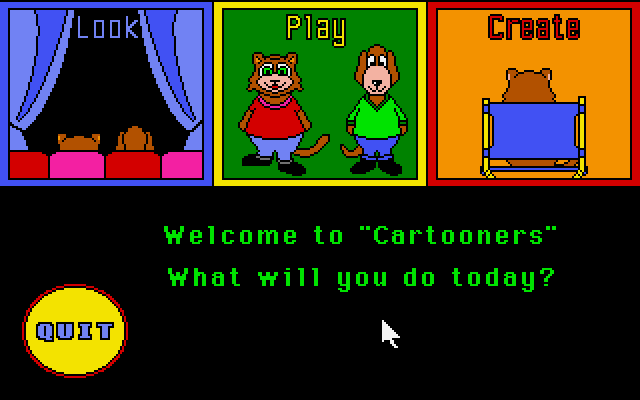 Electronic Arts developed a DOS game in the year 1989 called Cartooners. In the video game ranking, this game ruled the charts for a very long time. You can now play it again online by clicking here.

Before us is not a game in the full sense, and remarkable for their capabilities of the designer of the cartoons that came on a PC with the Apple II. It was ported by enthusiasts. At first glance, it's a nice, but unpretentious entertainment application for children of primary school age. But we should start to experiment and find out what to do there is much. Thanks to the combination of simplicity and flexibility the program is able to entertain both children and all who love telling stories through visual images.

Formally, the program has three modes: viewing of ready-made animations (like the demonstration and the player that you created), working with templates (where it is possible to develop the proposed procurement) and voluntary work (blank editor, where you create a cartoon from scratch).

For its time, the game has great hand drawn graphics that scales smoothly even at high screen resolutions. The sound is presented MIDI-like music (format .MUS), and talking to the characters like in the comics text. For processing speech, thoughts, and voice-over reviews has a leader different forms. Looking ahead, we say that in the game you can add it on the Russian (and any other language), but only in the form of pre-prepared raster sprites.

The lack of actual game with a storyline and a strategic element (as in Charlie Chaplin, Steven Spielberg's Director's Chair or, much later, The Movies) in this case is a big plus. No distractions from creative endeavors, but they are here in the forefront.

The animation editor is based on the principle of the "sandbox": you add to the scene willing actors and scenery, and then adjust their behavior in the frame using the top menu, and finally go on the record. The result can be edited frame by frame using the bottom panel, creating interesting and sometimes unexpected effects. Outset, the concept of "Actor" here refers not only to animate actors, but any moving and static objects that are not part of the background. This may be a bonfire, butterfly, cloud, explosion effect and so on. The main characters not so much: dog, cat, pig, squirrel, wolf, rabbit, ferret, mouse, duck, robot and several types of aliens. They all look nice, and each had its own set of available animations.

Additional objects and effects - a couple of dozen. Of course, for the boundless imagination that is not enough, but if you have imagination there is a place finds. Fortunately, over time, the program was complemented with an informal utility to import/export resources. It allows you to edit and create from scratch the background and objects (including animated), so your options are much wider. In fact, the actor file (.ACT) is the set of all frames of animation plus a text file describing how these images use. To understand very easily. One has only to remember that for the whole game graphics, the color palette is limited to 63 colors. To the palette to remove and adapt your additional sprites, you need a program like Grafx 2.

The interface of the game editor in English, but is so simple that it is unlikely for someone with a problem. The main thing: if something works - then it should be. Do not look for the button that removes the selected objects (actors), and do not click with the button with the eraser - it erases all the content of the frame. To get rid of unwanted object, simply drag it over the edge of the screen and release.

Cartooners can be recommended to those who would like extra time to practice my imagination and sense of humor.

Success to you in the field of animation!

Not sure how to pass your time, why not play our classic videogame Cartooners online? And the best part, it is for free!