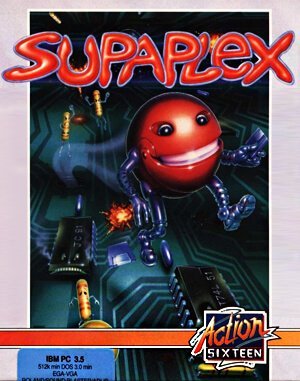 Click here to play Supaplex online
5.0 /5
Supaplex introduces a number of new elements that were not present in Boulder Dash, including bugs, pieces of base that randomly cause a life-threatening electrostatic discharges, Ports, which limit Murphy's movement to specific directions, and terminals, which set off yellow Utility Disks

Supaplex is a video game created by Philip Jespersen and Michael Stopp, two Swiss students, and published by Digital Integration in 1991. It is an extended clone of Boulder Dash. Play Supaplex online!

Supaplex is a puzzle game reminiscent of Boulder Dash. The player controls the red Pac Man looking character called Murphy. The objective is to reach the exit, which is only opened when a certain number of Infotrons are collected (usually all in the level). The setting is inside of a computer, therefore some computer terminology describes elements found in the levels. This includes destructible RAM chips, indestructible hardware, utility disks (which are explosives), terminals, and ports (one or two way gates). The most common enemy is a zonk, a rock which falls and rolls downwards, and explodes if it comes in contact with some, but not all other game elements. One of the most common enemies are a scissor looking enemy called snik snak which always moves in a predictable pattern.

Some levels feature gravity, where Murphy will fall down if he stands still, and has nothing beneath him. Other elements have fixed rules, such as Infotrons and Zonks always falls down, while RAM and hardware always stays put. There are 111 levels in total, and up to three of these may temporarily be skipped to advance. The game allows several profiles so that players may use the same computer with their own progression.

You can play Supaplex online here, in web browser for free!