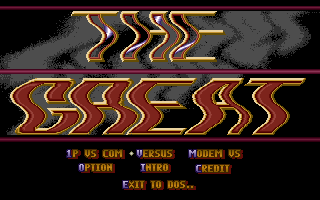 Click here, to play the famous game The Great Fighter developed by Samsung Electronics Co., Ltd. in the year 1995 and enjoy! Remember do not get nostalgic!

Street Fighter is the oldest decades of developing a series of computer fighting games. It is difficult to say whether such was her initially but it so happened that in the first half of the nineties, many Asian developers began to furiously scribble numerous counterparts, including representatives pepsicola Republic. In fact, because the skill of successful borrowing need to develop; besides, this project was only the second in the history of the then still budding (as time has shown – in vain) Studio Sigmatek Entertainment and had chances to bring the glory of the creators of the successful cantelow. But... something is not set and plans came apart like beads from a broken fishing line. It remains only to pick them up and see.

The first thing that catches the eye is the huge gap between the visual component of the various components of The Great Fighter:, from cover to final movie. There are a total of four different variants, and none of them images of characters unlike any other, and not only in terms of the selected style: drawn by simply all kinds of people, even the gender ratio is maintained. This moment really makes a wild impression to Express disdain for the players in a similar way, very few people venture.

But let's not dwell on the negative moment. Although, more precisely, on this particular negative, since the following meets us right behind him, and that's the plot. The Intro starts with a demonstration of the fall in the coastal zone of a certain object, and not entirely clear (subtitles Korean after all), is this a gift from the Northern representatives of a divided nation or something from space. Anyway, then we see conversing on the phone a young man who, after negotiations, enters into a dialogue with approaching a girl, gives her the car keys, and together they go down to the garage. Approaching the car, the lady turns to the young man his face with his eyes closed, in response to which he also lowers his eyelids, and they start great standing in this position. Unable to bear the absurdity and stupidity of the situation, unhappy vehicle detonates, consuming in the flames of a frustrated driver. Boy forced to open his eyes, leading him into a rage, and he starts to chase a flickering shadow that seems to a possible cause of the tragedy. A stranger catching up, and the result was a brief conversation... we get to the main menu and you can forget about everything that just transpired, as no reflection in the future it will not find. That is, it was something completely meaningless, with no in-game characters, added, apparently, just like that.

Having overcome the shock of the Intro, get acquainted with the main menu. Everything is standard: a pair of settings, practice with "dummy", sparring with a friend on one computer and a single player mode. The latter is the main: here we are asked to choose one of eight fighters and controlling them, to defeat all others, including his own DoppelgangeR. Having defined the choice, we begin a series of fights interspersed with bouts of deja vu: the ears of Street Fighter and climbs in the elements of appearance of fighting, and (this is most noticeable) in their poses and animations, and in the Arsenal of special moves, and even in the backgrounds of arenas. Artists levels had such a vivid imagination that sometimes gets the impression that they just rearrange the scenery from the original and finished in this work.

The process of beating the opponent could get very exciting, because of the presence of a sufficient number of different punches, combinations and super arts, including remote (Yes, cries of "Hadouken!" here are not shy), but... there is one but. And it consists in the complete lack of balance: the blocks reduce incoming damage by only half, which makes the tactics of spamming one attack is the most efficient and the only true. It is interesting that artificial intelligence, no fool, understands and uses actively. In the end, the fights turn into a drum roll on one key, because trying to do something different can lead to successful counter-attack a computer opponent, and not the fact that he makes the same mistake.

As for the technical aspects, the only thing the game can produce, is still very shameless copying and sometimes even quoting Street Fighter. If you try to abstract from this specific feature, the visual performance, music and sound is quite good.

The Great Fighter is trying very hard to stretch a C-grade; in addition, it was only the second attempt by developers from Sigmatek (future SiEn Art) in the field of creating computer games, and there was hope that these people will gain experience and will give to the public something worthy, but, alas, as time has shown, there is a syndrome of chronic of hacks. Well, The Great Fighter is just a bad clone Fighter and Steer.

Want to play The Great Fighter online now, play it on your browser here.